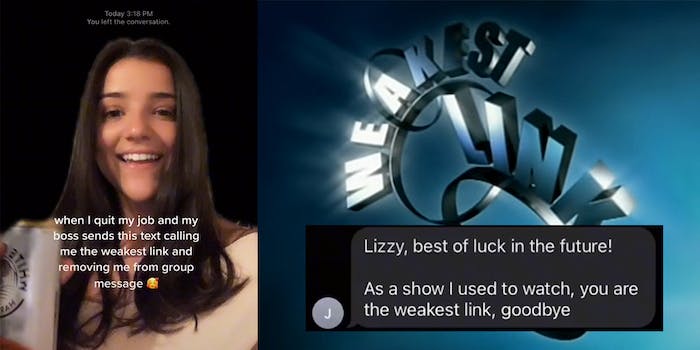 ‘Goodbye’: Boss calls worker the ‘weakest link’ as she’s removed from the group text after resigning in viral TikTok

‘The weakest link was usually the one they felt threatened by.’

In a viral video posted on Jan. 14, TikToker Lizzy Simmons (@lizzosimmons) posted a screenshot of her former boss calling her “the weakest link” and removing her from a group chat following her resignation. The video has 44,000 views.

“Lizzy, best of luck in the future!” the text message said. “As a show I used to watch, you are the weakest link, goodbye.”

In her caption, Simmons wrote, “Anyone know what show he’s talking about?” Then, many users let her in on the meaning of the catchphrase.

One user wrote, “I used to watch that show ngl [not gonna lie] best of luck in the future though!”

The Weakest Link is a game show in which eight contestants answer seven rounds of questions, and after each round, contestants decide who’s eliminated until there was one winner. The show aired in the U.K. from 2000 to 2012.

“The weakest link was usually the one they felt threatened by,” one viewer commented on Simmons’ video.

Simmons did not clarify why she resigned, but she’s one of many workers who have been part of the “great resignation” since the beginning of 2021.

The great resignation, aka the “extraordinary exodus,” is an ongoing economic trend in which employees have been voluntarily resigning from jobs in large numbers. This has been attributed to the stress of working remotely during a pandemic and workers re-evaluating what’s important amid competitive job markets.

According to WIRED, a poll from Citrix in September 2021 found that 35% of tech workers left a job because of burnout. When entering their new jobs, 81% of workers were looking for either flexibility or benefits beyond financial security—perks surrounding wellbeing.

USA Today reported that as of November, 4.5 million Americans have left their jobs, matching the high record from September, and employers have posted 10.6 million job openings.

While some of the reasons have to do with unjust working requirements and conditions, some Americans cannot afford expenses needed to return to work, such as child care, and others are afraid of contracting COVID-19, especially due to the rise in cases with the omicron variant.

The Daily Dot reached out to Simmons via direct message on TikTok.