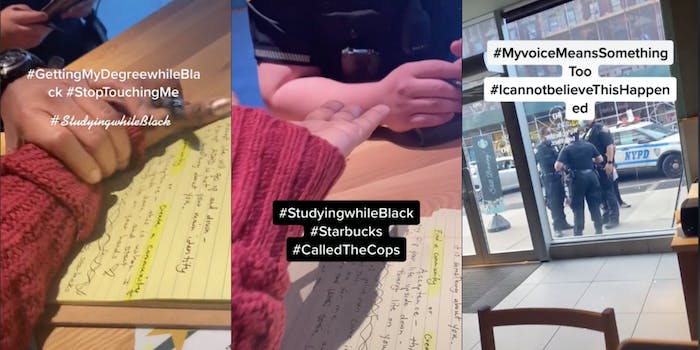 She had already been studying in the coffee shop for two hours.

A Black woman says Starbucks employees called the police on her while she was studying in a Starbucks in New York City because she couldn’t provide proof of vaccination.

The video, posted on TikTok Friday with the hashtag #StudyingWhileBlack, shows police officers asking the woman to pack her things and leave the coffee shop.

“What I am asking is to understand what happened,” the TikToker, @daniyaneu, says to officers in the video.

Another video shows one of the officers grabbing the TikToker’s wrist and demanding that she leave the store.

She explains in subsequent follow-up videos that she purchased a drink when she entered the Starbucks and had studied for nearly two hours before an employee asked her for a vaccination card. The TikToker says despite being vaccinated, she was not carrying her card.

“Why two hours?” she remembers saying to the employee who let her stay in the store for so long before asking for proof of vaccination.

Another video shows @daniyaneu taking a summons to appear in court by the New York Police Department. An officer says that by leaving the Starbucks, she wouldn’t have to take it.

“I need proof that this is happening,” she responds to the officer.

The Daily Dot has reached out to @daniyaneu through TikTok and Starbucks via email.