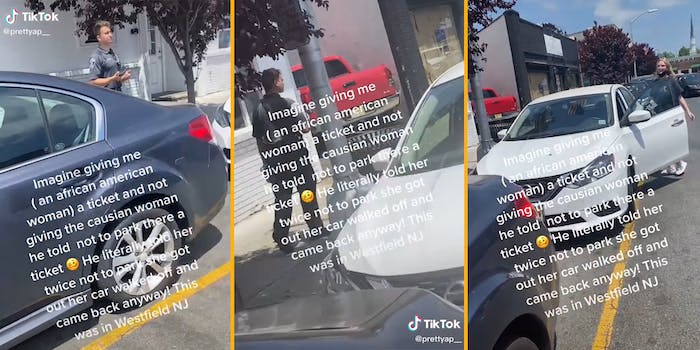 ‘She knows her privilege’: Black TikToker says cop gave her but not a white woman a parking ticket

A TikTok video shows apparent racism at play in New Jersey when a Black driver says she was issued a parking ticket by a white police officer—who then allowed a white woman to move her car from the same illegal spot.

The parking ticket incident, and the subsequent comments by white people, exemplify the realities of discrimination against Black women, who are often dismissed when they point it out.

User @msap__ posted the video, which has over 730,000 views, with the caption: “I’m not saying I was right, but if he gave me a ticket, why not give one to her? What is good for the goose is good for the gander.”

The overlay reads, “Imagine giving me (an African American woman) a ticket and not giving the caucasian woman he told not to park there a ticket. He literally told her twice to not park. She got out her car, walked off, and came back anyway.”

The TikToker says the white woman essentially pulled up as the officer wrote her parking ticket. The white woman allegedly went inside a store and returned without consequence even though she blatantly disregarded the officer’s instructions.

“He’s allowing her to move her car without a ticket,” she says.

The video shows the smirking white woman getting into her car, and @msap__ says she’s documenting the situation to “fight the ticket in court.”

“The way she’s smiling—she knows her privilege,” the TikToker says.

After commenters accused her of lying about the incident, the TikToker posted another video to further break it down.

She says the same officer “verbally warned” the white woman twice after she parked in the same loading zone, but the woman went in and out of the store and drove away without receiving a ticket.

“If you don’t see the problem in that, I can’t help you,” she says.

White commenters still suggested there could be more to the parking ticket story. One user wrote, “Don’t break the law.” However, other Black people familiar with Westfield, New Jersey, said anti-Black discrimination is rampant in the area.

User @kimmichurri wrote: “Every POC in Jersy know to avoid Westfield and other towns for this very reason and other unreasonable traffic stops.”