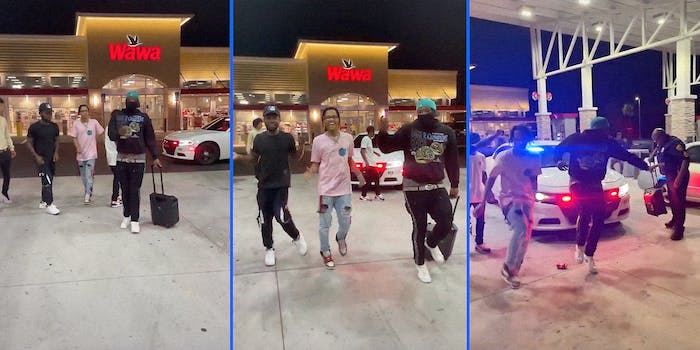 'I honestly don’t know why the cop did all that.'

After more than a million viewers watched a Florida police officer use his car to hit a Black TikToker who was dancing with his friends, the Tampa Police Department invited the man’s crew to a “dance off” at the police headquarters.

An unmarked white car pulls up and blasts a police siren as it drives towards the dancing men and hits one of them from the back. Jayy identified the person as Kobe and said it was his birthday on Sunday. In the video, Kobe looks confused as the car nudges him.

The rest of the group, unaware that their friend has been hit behind them, continue their dance until the car pulls up to them and stops. A Black police officer steps out and picks up the rolling speaker that one of them was carrying.

“I honestly don’t know why the cop did all that,” Jayy told the Daily Dot.

Jayy said Kobe filed a complaint with the Tampa Police Department, but the Daily Dot was unable to independently verify whether a report was made.

When reached on Monday, the Tampa Police Department told the Daily Dot that it could not comment. The department’s public information office first learned about the incident when the Daily Dot requested comment.

After the Daily Dot’s inquiry, the Tampa Police Department Instagram page contacted Rivera. According to a screenshot shared by Jayy, an individual identifying themselves as the department’s public information officer responded to Rivera’s Instagram story.

The officer offered to “provide the car and lights” in a “dance off” challenge at the police headquarters. “Let’s make it happen,” the officer wrote in a direct message with an angel emoji.

In another video, Instagram user @t.eian, whose name is Eian Rivera, shared that in the moments after the video was taken, the officer called for backup.

“I felt threatened right when he pulled up because right when the police [took] the speaker, he called back up,” Jayy said on Monday.

According to Jayy, the officer claimed he didn’t hit Kobe.

Rivera says in the video that the venue where they were performing had shut down, and they were wondering what to do next.

“We got invited to an event to perform and it ended at 3am, and we were just having so much fun planning on new videos to do because we are entertainers and we always need something new,” Rivera told the Daily Dot.

He said they were “chilling” outside the Wawa and going over some dances with music that wasn’t loud.

“When it was time to do the actual video, we turned the speaker up, no one had a problem,” he said.

That’s when the officer’s car came up. Jayy says there was no prior communication or warning from the officer.

“I guess he was trying to get us to leave or something,” Rivera says in the video, which shows the group approaching the officer as he calls for backup.

The officer says they were “blaring music in the middle of the night,” and the men say there were no complaints.

“First of all, there are homes around here,” the officer says, pointing around. “It’s 10pm, it’s a quiet hour.”

Both Jayy and Rivera told the Daily Dot that the incident took place after 3am.

Rivera tried to explain the music and dancing was for a TikTok video, and the officer says he was intervening the same way he would for a “robbery.”

“This is not a robbery,” one group member says.

“This happens to us so much that police actually do that, they turn up in our video,” another member says, explaining why they didn’t know the officer was trying to stop them from dancing.

“I’m not trying to be in the video,” the officer says.

A few minutes later, another police officer approaches the group. According to Jayy, there were two backup officers, both white.

Jayy told the Daily Dot the officers waited 30 minutes before returning them to their speaker. “He wanted to get names and call back up before getting our stuff back,” Jayy said.

The TikTokers have a massive following both on TikTok and Instagram. Jayy’s TikTok video had been viewed more than 1.3 million times by Monday evening.