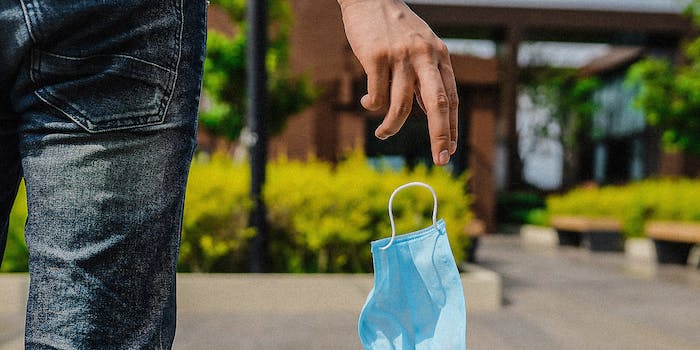 'Who needs creamer with their coffee when you can have COVID for no charge?'

A TikTok video shows a California cafe’s sign that told customers to “throw your mask(s) in our trash bin to receive 50% off your order.” The clip went viral on Tuesday, nine months after the owners were fined for non-compliance.

The owners of Fiddleheads Cafe in Mendocino, California, posted the signs on their windows in June and received a $10,000 fine from the County of Mendocino for failure “to file a ‘self-certification’ with the health department” during the same month, according to a GoFundMe posted by Chris Castleman.

The TikTok, which has accumulated over 723,000 views, shows the 50% off sign and another sign asking customers to be “tolerant.” The sign includes a list of agreements customers “consent” to when they enter, including respecting non-masked people’s “freedom to breathe.”

An individual in the background is heard asking, “That’s crazy, you taking a picture of that?” The person recording says, “Yeah.” The caption of the video says, “The disappointment in her voice…”

The TikTok has received over 35,000 likes and over 1,600 comments. One commenter wrote, “As a Californian I don’t claim them.”

Others commented that the cafe closed and referenced the GoFundMe, which attempted to raise $2,000 to “hire a lawyer.” Castleman, who did not immediately respond to the Daily Dot’s request for comment, wrote that the cafe “sustained 3 months of attacks” from activists and politicians.

“The time has come to fight back,” the GoFundMe page says. “We will never give in to an angry crowd of self-righteous and over-opinionated people. Help us hire a lawyer to defend our right to stay open and serve our customers.”

Castleman also accused a county supervisor, who did not respond to the Daily Dot’s request for comment, of spearheading a campaign “to shut down our small town operation.”

Nine months later, individuals are still criticizing the cafe for its reaction to COVID-19 regulations.

One individual tweeted, “At Fiddleheads Café, COVID is on the house..” Another said, “Who needs creamer with their coffee when you can have COVID for no charge?”

One TikTok commenter said “it’s literally not that hard to be respectful and wear a mask.” Another wrote, “natural selection.”