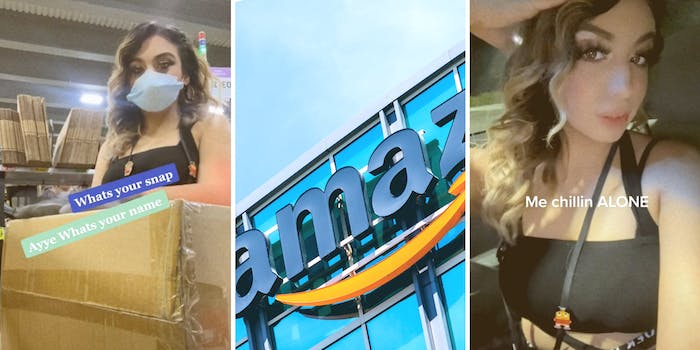 ‘I can be wearing a damn sweater and joggers they still be attacking’: Woman says she’s sexually harassed by male Amazon co-workers in viral TikTok

An Amazon packer said in a viral TikTok video that she is sexually harassed by her male colleagues at the warehouse where she works.

On Saturday, Priscilla (@misss_thanggg) posted a now-viral TikTok. The video shows Priscilla sitting alone in her car and then working in the warehouse and being approached by men. Her text overlay reads the comments they say: “What’s your snap [Snapchat]?” “Let’s chill on break.” “Ayye what’s your name?”

In the clip, a man she calls a “thirsty water spider” comes up to Priscilla and asks for her number. “If you work at amazon, you know,” she captioned the video. The TikTok had over 105,000 views by Monday.

In the comments, some people made sexist remarks about her clothing choice being the cause of her harassment.

“Boy i can be wearing a damn sweater and joggers they still be attacking like piranhas lmao,” Priscilla wrote in response.

Others defended her, noting that how a woman dresses is not grounds to be harassed. “Okay so that doesn’t mean she’s offering herself to guys it just mean she wants to wear whatever she feels like,” one viewer wrote.

“The fact that you guys are saying because of what she’s wearing is what’s wrong with the world a girl [should] be able to wear what she wants,” another user commented.

Others said that similar incidents occur at their Amazon warehouse. “She aint wrong i work at Amazon and most of the guys are like that sum of the girls are like that too,” one user wrote.

A number of women have reported facing sexual harassment, sexual assault, and racial discrimination while working at Amazon.

In May 2020, a woman in Canada said she was groped and forced to kiss an HR manager and was blamed when she tried to report the incident. In May 2021, five women working in corporate roles or warehouse management filed lawsuits against Amazon based on alleged discrimination from white managers.

The Daily Dot has reached out to Priscilla via TikTok comment and Amazon via email.