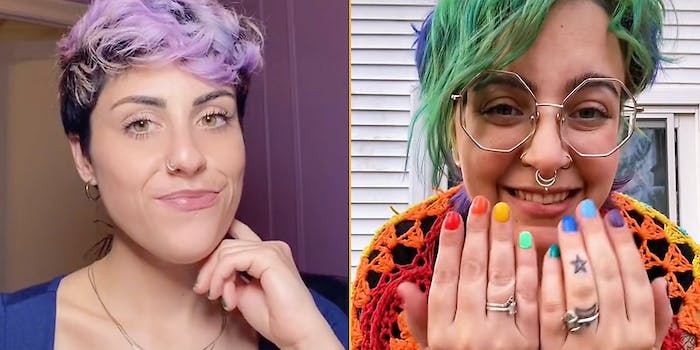 ‘Wait why is this working?’: TikTokers with ADHD stay on task with co-working live streams

The community feeling is integral to the ability to focus.

When Luna Weber (@lunatheweedwitch) needs to focus, she turns on TikTok Live. Weber lives in the Hudson Valley and runs an Etsy shop. Because she has Attention Deficit Hyperactivity Disorder (ADHD), she can find it difficult to get through the boring, administrative tasks required to run her business.

“As long as I can remember, I can’t get those little tasks done,” she tells the Daily Dot. “I always had to have somebody around. Even growing up, like if I had to fold my laundry, my mom had to sit with me.”

Weber, 31, uploads humorous videos and makes content about being neurodivergent on TikTok. But if she needs to hold herself accountable at some point during the day, she’ll begin a live stream. In turn, she invites others with ADHD to join her, setting up a space for them to focus together, virtually.

“It’s a really nice way for me to [work] without feeling like I have to be constantly dependent on the people that are directly here with me,” Weber says.  “I can have people out in the internet world who can support me who also need that support in return. It’s a really nice exchange.”

In an unlikely pairing, individuals with ADHD are using TikTok Live to increase their productivity. Creators are branding live streams as “ADHD workspaces,” filming themselves during the workday as viewers tune in to work alongside them online. For individuals with ADHD, the power of a smartphone has been flipped on its head. Instead of social media being a distraction, it becomes an accountability partner.

About 4% to 5% of American adults have ADHD, according to statistics from the National Institute of Mental Health, and studies have repeatedly shown women and girls are more likely to go undiagnosed than their male counterparts.

“It’s like, ‘Wait, why is this working?’” says TikToker Allie Campbell (@alliekcampbell) from Jersey City, New Jersey, who hosts a 4-and-a-half-hour ADHD workspace Monday through Friday.

Campbell, 32, who also has ADHD, told the Daily Dot that she started her co-working space earlier this year through experimentation. She already was making content about managing ADHD and wondered if it was possible to bring the co-working experience online.

“I don’t have any magical story to explain it other than it just kind of popped into my head,” she says. “I’ve seen the improvement in my own productivity from working in physical co-working spaces. So it seemed kind of like a no-brainer to see whether or not a virtual one would have the same effect.”

Campbell is a freelance contractor in communications and marketing, in addition to making TikTok videos around ADHD, sobriety, and LGBTQ issues. She found the TikTok Live co-working sessions so helpful that she made them a permanent fixture of her workweek, going live now four to five times a week.

Campbell runs her sessions using the Pomodoro technique, a time management tool developed in the 1980s in Italy by Francesco Cirillo. A university student, Cirillo developed a system where an individual works for 25 minutes, takes a 5-minute break, and repeats. He came up with the idea based on a novelty timer shaped like a tomato (“pomodoro” in Italian).

Campbell repeats these 25-minute working sessions with her viewers throughout the day. She’ll even color in a cartoon tomato when they finish one interval and celebrate a break.

“People with ADHD are typically very reward-driven,” she says. “So just knowing that there’s a break at the 5-minute mark when we can hang out and mess around, I color in a little Pomodoro tomato on my board to show, ‘Hey, we just got done with a 30-minute time slot. So give yourself a pat on the back.’”

But Campbell isn’t working alone. It can be hard to measure real viewership and average watch time on TikTok Live as audience counts include those just scrolling through. Campbell says her live streams will average around 6,000 views per session, sometimes peaking at 18,000. She can recognize regulars by their handles and says the community feeling is integral to the ability to focus.

Many individuals with ADHD struggle with “feeling understood in the workplace,” Campbell says. “Being in a community with other people who are neurodivergent… there’s not that level of shame to just come into the [live stream] and be like, ‘Hey, I’ve been trying to do something for six hours and I have only done a quarter of it.’ It’s like, we get it.”

“I think it has potential for success,” says Kamran Fallaphour, a New York City psychologist specializing in ADHD. “A new model could emerge.”

When it comes to treating ADHD, there are two types of interventions, Fallaphour says. ADHD impacts the regions in the brain that are responsible for judgment, impulse control, and the direction of attention. The first category of practices attempts to “rewire” brain functions, Fallaphour explains, and the second is focused simply on managing symptoms. Workspaces on TikTok Live fall squarely into the latter category.

“People with ADHD need structure,” Fallaphour says. “If they’re not in an environment where there isn’t a lot of structure, they usually don’t do very well… That’s why actually, the pandemic has been really difficult for a lot of people with these kinds of disorders.”

For managing ADHD, the key is to minimize distractions within that structure.

“The brain of someone with ADHD has been hard-wired to be more vigilant about the environment,” Fallaphour says. “And to take environmental cues such as sound movement and visual changes more seriously. Because at some point, it was important to our survival.”

Phones can easily become a debilitating distraction for individuals with ADHD. Both Campbell and Weber discuss struggling with phone usage in the past. But going live on a TikTok workspace actually has a counterintuitive impact: having their phones out more means they’re using it less.

“I’ve actually lowered the amount of time that I’m truly consuming content,” Campbell says. “Because four-and-a-half hours of the day are spent with my phone basically inaccessible to me.”

“I realized after a while that it was keeping me off my phone. Because I would have my phone setup,” Weber shares. It’s become important for her while working “just not having that phone in my hand to be able to distract me.”

Weber adds that she’s become so reliant on the live streams for her productivity that when she was temporarily banned from TikTok for discussing cannabis and body positivity content, she set up a backup account @lunatheweedwitchlive just to go live.

Moving forward, Fallaphour says the ability to prevent intrusive distractions will prove the success of the workspaces. Viewers must be able to avoid the temptation to leave the live stream or check other social media, but more phone time doesn’t have to be a bad thing.

“You can use a knife to do surgery or stab people,” Fallaphour says. “It’s a tool and how you use it is what really matters.”