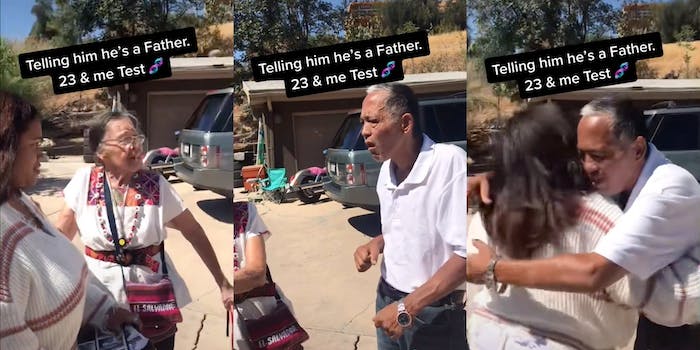 'I hope you feel more loved than you ever imagined.'

A woman on TikTok surprised her biological father and met him for the first time after taking a 23andMe DNA test.

The woman, named Brandace or @dodocaca_92 on TikTok, shared the video footage taken of her and her biological father meeting for the first time, and viewers absolutely loved it. The video of their meeting has garnered 6.8 million views.

“Awe this is a really intimate and beautiful moment in your life thanks for sharing it with us!” one user commented on the TikTok.

After she repeatedly explained in both English and Spansih that Brandace was his daughter, the father still didn’t seem to comprehend, saying, “But whose daughter is it?”

Finally, Brandace explained that she took a DNA test and it matched her to someone named Beatrice, who Brandace said was her aunt.

“Really?” her father exclaimed. “So I’m meeting you for the first time then?”

Then Brandace said she had a DNA test for him to take to prove his paternity. Without hesitation, he agreed to take the test and reached out to hug her.

“Anyone else start BAWLING when he reached out to hug her?!” one viewer commented. Another added, “I love that he had no hesitation [in] taking the test to prove he was the father.”

Several users commented on the fact that he was confused in both Spanish and English. Some asked if he was just confused or had a medical condition.

“Both,” Brandace said in a reply to the comments. “He has dementia now.”

In a “part 2” TikTok, Brandace posted additional footage of their meeting, showing the end of her embrace. After he broke away from the hug, the father turned to his mother, the grandmother, to tell her, “I didn’t know I had a daughter mom. I didn’t know!”

“He would have been a good dad you can tell that family would’ve embraced her,” one user commented. Another said, “I’m [bawling]. What a sweet man. I hope you feel more loved than you ever imagined.”

In an additional TikTok “Story Time,” Brandace gave some additional background information about her biological parents. She said her mother was in a car crash at the age of 16, after which she was never mentally the same; she’s been in mental institutions ever since.

According to Brandace, her father has had mental health issues since a very young age, when “mental health awareness wasn’t as treated as it is today.” Her parents met and conceived her in a mental health institution.

Brandace did not respond to the Daily Dot’s request for comment.