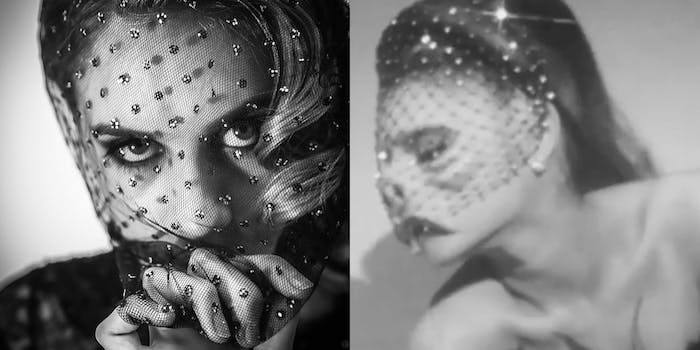 Emily Jane Davis, a photographer and art director in Brooklyn, told the Daily Dot that Grande’s Halloween video looks “exactly like” her own art series. Davis, who has less than 4,000 followers on Instagram, shared videos and photos from her “Beauty Interrupted” series in 2017.

One of Davis’ videos features model Krystall Schott wearing black lace and fur. The video has a filter overlay that imitates Super 8mm film and is set to the song “I Want to Be Bad” by Helen Kane. At the time, Davis’ series was featured in Drome magazine and described as “dark side of Old Hollywood glamour.”

Grande’s video, posted on Oct. 30, has undeniable similarities, including the black and white film-like filter and brief close-up shots. The singer sits on the floor and models a fur stole and a lace face net similar to the ones seen in Davis’ film. Grande, however, wears pig face makeup and instead of music, the audio is Rod Serling’s famous Twilight Zone voiceover: “You unlock this door with the key of imagination…”

Davis posted close-up photos of Schott in a lace face net with rhinestones as part of her “Beauty Interrupted” series in 2017.

Davis said she won’t seek monetary compensation from Grande. She just wants celebrities to know that copying artists is not OK.

“What is most important to me is calling attention to bigger artists stealing ideas and work. It is wrong and takes away an artist’s voice,” she told the Daily Dot. She said she reached out to Grande’s team but hasn’t heard back.

Davis said the growing list of celebrities accused of plagiarizing the work of artists who are not given due credit is disheartening.

“Artists work extremely hard to craft original ideas and it takes immense time and energy to bring them to life—especially on low budgets,” Davis said, adding that she did not receive any funding for her 2017 film. “Then when I see celebrities and their teams take that hard work, it is really heartbreaking.”

The Daily Dot has reached out to Grande’s record label, Republic Records.