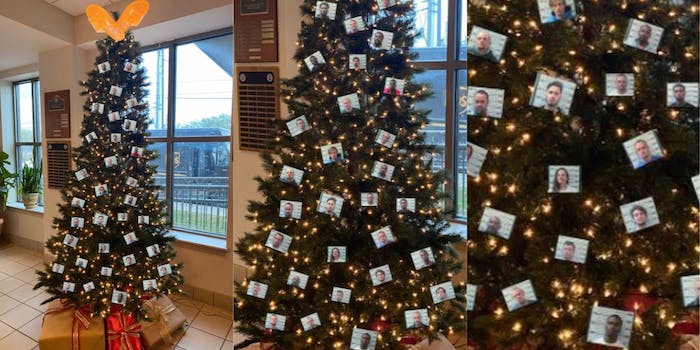 The 'star' of the tree is a pair of inmate sandals.

The Mobile County Sheriff’s Office in Alabama is getting criticized for posting a photo of a Christmas tree adorned with photos of people who’ve been arrested or are wanted for crimes, calling the photos “thugshots.”

The sheriff’s office posted the image to its Facebook page on Thursday. The “star” of the tree is a pair of inmate sandals. The “decorations” were reportedly Photoshopped onto the tree.

“We have decorated our Tree with THUGSHOTS to show how many Thugs we have taken off the streets of Mobile this year! We could not have done it without our faithful followers!” it wrote in its post.

According to AL.com, over 7,900 people commented on the post, with one calling the behavior “disgusting.”

A spokesperson for the sheriff’s office, Lori Myles, defended the tree on Friday. Myles told AL.com that the post was “part of a series of ‘thug Thursday’ messages that highlight photos of people who wanted various crimes.”

“The thug tree was to show how many people we have arrested by putting them out there (on social media) and having the community sharing that we were looking for those people in which led to an arrest,” Myles told the outlet. “It’s a good thing. It’s a good thing in a community that they have taken these career criminals off the streets. We were thanking them and showing the results of Thug Thursday.”

“It’s funny and does draw attention, and that is why we share it,” continued Myles. “There are results. We were not making fun (of those arrested), but it’s about looking at what happens when a community gets involved and gets tired of these people and their criminal activity. It’s law enforcement and the community working together.”

The word “thug” has a racist connotation, as it is a word that has been used throughout the nation’s civil rights history to describe Black people and delegitimize racial protest movements, according to NBC News. Though some supported the post, many criticized the message as “degrading and cruel treatment by the sheriff’s department.”

JaTaune Bosby of the American Civil Liberties Union (ACLU) of Alabama told AL.com that mental illness and substance abuse should not be made a joke as “the majority of people arrested for crimes struggle with” those issues.

“They need the community’s assistance and care, not open scorn from leaders,” she said.

“We live in a very volatile time,” said Robert Clopton, president of the Mobile County NAACP. “I mean, the relationships between law enforcement and the general public has been compromised. Not only that, but we are living during a pandemic right now where everyone needs to be focused on the same goal, and that is having as many people helping each other or to help navigate through this atrocity that is going on right now.”

“This is inappropriate, shameful, disrespectful, despicable, disgusting, and embarrassing to the citizens of Mobile County.”

Twitter users also had something to say about the tree. “They claim to be understaffed but have time to photoshop this racist hack job? What a waste of taxpayer funds,” wrote @DixieBeDamned.