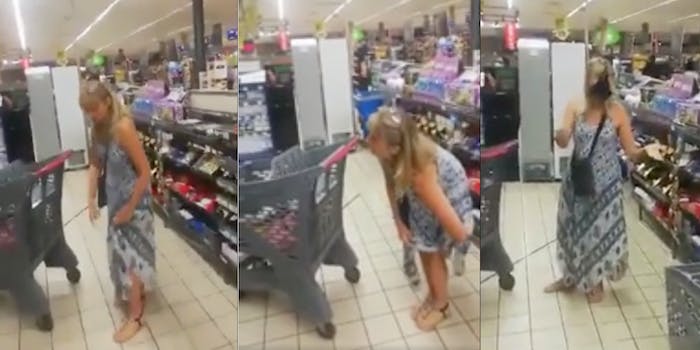 Video: ‘Thong Mask Karen’ removes her underwear in grocery store to use as face covering

A viral video shows an anti-mask “Karen” elevating the art form of the grocery store tantrum by ripping off her thong and using it as a mask.

The video, uploaded to Reddit’s r/PublicFreakout page, is filmed from the checkout line of a grocery store. A cashier has just stopped a woman wearing a long, gray dress to request that she wear a mask.

The woman barely argues back—a telltale sign that she isn’t a true Karen—before crouching down and thrusting her hand far up her skirt. She then slides a black thong down her leg and wraps it around her face like a mask.

The other customers express their bewilderment as Karen carefully arranges the thong over her face, with the largest portion covering her mouth and the thin strap running over her nose and between her eyes.

Thong Mask Karen then flashes the cashier a thumbs-up, using one hand to keep her impromptu face mask in place. Another bemused customer says that “the bacteria on the mask is less than her knickers” and mockingly applauds Karen, earning laughter from her fellow shoppers. Karen seems to appreciate the attention, even raising her arms in acknowledgement.

The disciplined detectives of Reddit quickly determined that the video, while hilarious, was staged. As several people noted in the comments, Thong Mask Karen only lifted one leg when removing her underwear. Unless she came prepared with some kind of snap-on thong, she must have been prepared to ditch her underwear for the stunt.

Still, some viewers, frustrated by anti-maskers’ constant lack of respect for the safety of others, wished the worst for Karen.

“I hope she gets fuckin’ pink eye,” one user wrote.

Other viewers were preoccupied with how unsanitary the stunt was and flooded the comments with jokes about the smell.

“Yeast infection easier to treat than Corona I guess,” another joked.

Several people said this wasn’t the first Karen they’d seen pull a similar stunt. Earlier this month, a Ukrainian woman was caught on camera completely removing her pants, and then her underwear, at a checkout line, to use her underwear as a mask.