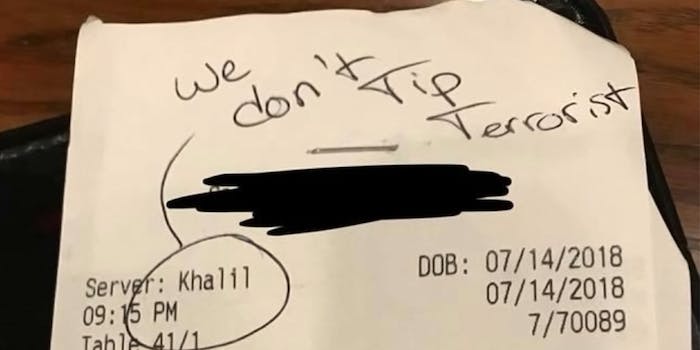 'We don’t tip terrorist,' the customer wrote on the bill.

After forgoing a tip for a racist note, a customer has been banned from a popular steakhouse in Odessa, Texas.

In a Facebook post that now has over 18,000 shares, Khalil Cavil shared a note he received from a customer while working as a server at Saltgrass Steak House on Saturday night. The customer had written a zero into the tip line on their $108.73 bill, circled his name, and written at the top “we don’t tip terrorist.”

Anyone who has worked as a server has experienced a terrible customer who refuses to tip on a large bill for no good reason, but nasty notes like the one Cavil received are a more rare and painful occurrence. “At the moment I didn’t know what to think nor what to say, I was sick to my stomach,” Cavil wrote in his Facebook post. “I share this because I want people to understand that this racism, and this hatred still exists.”

Speaking to local news station KMID, Cavil said that he doesn’t even have a Middle Eastern background and was named after a best friend of his father’s. “My dad was in the military and a buddy that he was very close to, served with him…Khalil was killed in an accident and so my dad just named me after him, one of his best friends,” he said.

Saltgrass Steak House is standing with Cavil. “We stand by and support our employee. Racism of any form is unacceptable and we have banned this customer from returning to our establishment,” COO Terry Turney said in a statement.

Since Cavil’s post went viral, people have been reaching out to support him, not just with words, but also with money, providing much more than the tip the racist customer initially stiffed him on. In a follow-up Facebook post yesterday, Cavil thanked those who have given to him, saying, “To all of the people who have sent me money I want to thank you as well. I want to make it very clear that this was never about the tip nor the money. It was about shedding a light on racism and sharing the love of Jesus.” Cavil says that he is taking the money people have donated to him and is giving it to missionary work through his church.

Update 8:25am CT, July 24: On July 23, Cavil and the restaurant said he made up the story of the racist customer. “I did write it,” Cavil told the Odessa American. “I don’t have an explanation. I made a mistake. There is no excuse for what I did.”

Cavil is no longer employed at the establishment, and the customer has been un-banned and invited to dine on Saltgrass Steak House’s dime.