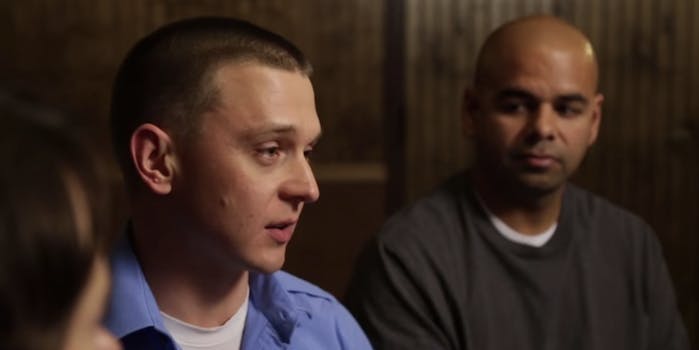 Same-sex marriage campaign gets a boost from Texas police

Texas doesn't mind if they put their lives at risk, but don't want gay officers to get married.

There are nearly 90,000 law enforcement employees in the state of Texas. On any given day, any one of them might be asked to place their lives in certain danger. In the eyes of the law, however, not all cops are considered equal.

While these men and women in uniform are charged with safeguarding their communities, and so entrusted with great power and responsibility, those in Texas who do not conform to heteronormative standards are disadvantaged by the predominantly conservative state.

Which is to say, unlike other police officers who serve at their side, they cannot legally marry the person of their choosing. Like the gay and lesbian citizens whose lives they are charged with protecting, they are not afforded the rights, protections, and benefits of marriage.

It’s rare to see police officers publicly expressing their political opinions, particularly on controversial issues such as same-sex marriage in a state like Texas. Nevertheless, that’s exactly what a handful of Ft. Worth cops did when they went in front of a camera to stand up for their gay brother-in-blue.

With the goal of ending the exclusion of same-sex couples from marriage, the group Freedom to Marry began a YouTube campaign on Jan 4 which focuses on a police detective from Texas.

“He puts his life on the line, just like I do.”

“I became a police officer in 2006,” Det. Chris Gorrie says, seated at a restaurant table surrounded by his colleagues. “My partner Justin and I live together. Eventually, one day, we’d like to get married just like everybody else.”

“Chris makes a sacrifice every day, along with the rest of us,” a fellow detective chimes in. Another officer adds: “He puts his life on the line, just like I do. … Texans believe in freedom, in liberty, and part of that is being able to marry who you love. So, Chris should be able to marry who he loves.”

Whether it’s a fair practice or not, the opinions of individual cops once aired are typically perceived by society as a reflection on their organizations as a whole. So, here’s to hoping that’s truly the case when it comes to Chris Gorrie and his partner Justin, and their struggle to be treated with the same respect as all the straight people in the Lone Star State.

Screengrab by Freedom to Marry/YouTube