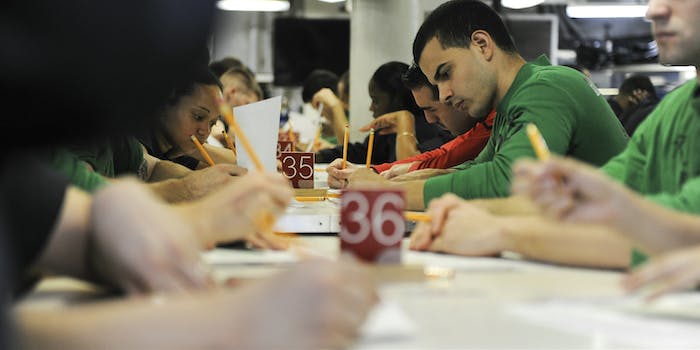 The U.S. has passed on implementing a standardized test measuring students’ ability to spot fake news, with the Trump administration criticizing the exam’s stability.

The test, developed by the Organisation for Economic Co-operation and Development (OECD), was created for 15-year-olds across the world to establish “global competence,” with a particular focus on separating facts from opinions, building cultural awareness, and identifying and rejecting extremist beliefs. Twenty-eight countries will opt in to implementing the test in schools; the U.S. is one of a handful, including the U.K. and Japan, that will not.

“We consider it to be an important innovation, but we want to allow it time to develop and crystalize into an operationalized assessment with a solid empirical foundation to validate its technical stability,” a U.S. Department of Education spokesman explained to Business Insider.

In the test’s fake news section, students must look at data and decide whether it’s a fact, an opinion, or a form of propaganda. For instance, one question asks students to compare graphs on climate change and identify which chart appears the most valid. And in the test’s cultural awareness section, one part asks students to identify why performer Renata Flores sings Michael Jackson’s “The Way You Make Me Feel” in her native language, Quechua.

Britain’s Department of Education also isn’t a fan of the test and believes it puts an undue burden on students by forcing them to take an additional standardized exam.

“All schools are already required to teach pupils to have a mutual respect and tolerance of those of different faiths and beliefs, so in order to not place additional burden on them, we will not be taking part in this smaller scale Global Competence assessment,” a spokeswoman from the department explained to Business Insider.