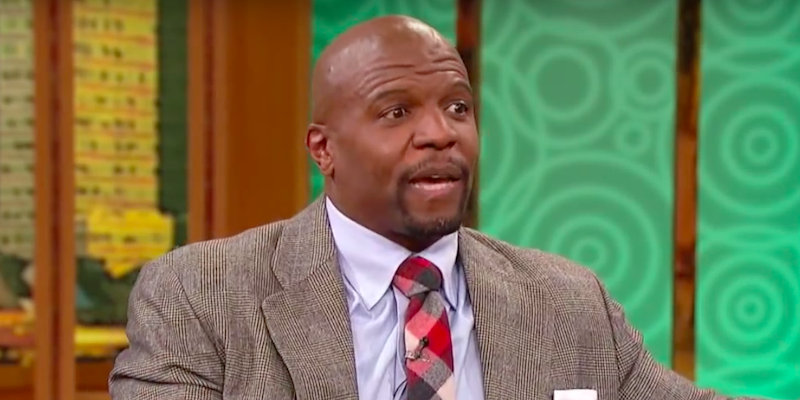 Terry Crews is facing criticism for his Twitter feed of late, including a now-deleted tweet in which he said that children without both a maternal and paternal parent are “malnourished.”

Crews has often been praised for advocating for the #MeToo movement. He also opened up in 2017 about the sexual abuse he endured from a powerful Hollywood executive, showing survivors come in all genders, races, and sizes.

However, the father of five started to receive backlash last week over his thoughts about the proper way to parent. Last Sunday, he shared a New York Times opinion piece by Derecka Purnell called, “Why Does Obama Scold Black Boys?”

Crews asked rhetorically how the writer, a woman, would know about raising a successful young man.

Another thing that bothers me is that this OP-ED was written by a WOMAN about how how boys should be taught to grow into successful young men.

How would she know?

“Another thing that bothers me is that this OP-ED was written by a WOMAN about how boys should be taught to grow into successful young men,” Crews tweeted. “How would she know. MEN NEED TO HOLD OTHER MEN ACCOUNTABLE.”

Over the course of the week, Crews continued to tweet about parenting, with outcry escalating on Saturday after he made a statement that many viewed as homophobic and disrespectful to single parents.

In a now-deleted tweet from Friday, Crews said, “I’ve reiterated many times that same sex couples can successfully raise a child. But I believe that paternal AND maternal love are like vitamins and minerals to humanity. No matter where you get that maternal and paternal love. MY purpose is to give paternal love,” Crews wrote.

Twitter user @jakesherondale pointed out “love is not gendered. A child will not starve with only one gender loving them.”

love is not gendered. a child will not starve with only one gender loving them.

He replied, “But they will be severely malnourished.” He later deleted the tweet.

I apologize to anyone who was hurt by my “severely malnourished” tweet. It was in response to someone who said kids wouldn’t “starve”.

It was poorly worded so I deleted it.

Twitter users quickly responded to Crews’ tweets with their own stories of being raised in non-traditional households.

I was adopted by two moms. And when I was 12, I came out as a trans guy. I didn’t have a “father figure,” but I had many examples of positive and healthy masculinity from people it all genders.

No ma’am In no way am I trying to invalidate your childhood. But do you have any male father figures at all?

You didn’t say male role model. You said father figure. You said paternal love. My niece and nephew will be just fine with two moms. I can be a positive male figure without being a father figure.

Others shared stories of dealing with abusive fathers:

things terry crews claims a father gives you:
a name
a story to pass on
self esteem and security
health

things my father has given me:
no child support
trust issues
abandonment issues
no money
shitty nicknames
where the fuck is my money bitch get a jobpic.twitter.com/iNtiSg1Fnc

I’m so sorry that happened to you. That’s an abuser, not a father. I went through the same thing. https://t.co/vxSEBZDKpF

Despite the outcry, Crews has continued to tweet about the issue, along with retweeting supportive statements.

I explained it just like I meant to. You need both. https://t.co/2aXCUEiHDW

Early Sunday morning, he invited those who don’t like his comments to unfollow him.

No one has to follow me. If you have problems with my tweets you are welcome to mute, unfollow, block or delete me. I do it all the time. I promise I won't be angry. https://t.co/h6VQSqOkzy

This isn’t the first time Crews has spoken out about parenting the “right” way. In 2014, he stopped by The View to talk about things you “can only get from your father.”

The Daily Dot reached out to Crews for comment but did not hear back by press time.