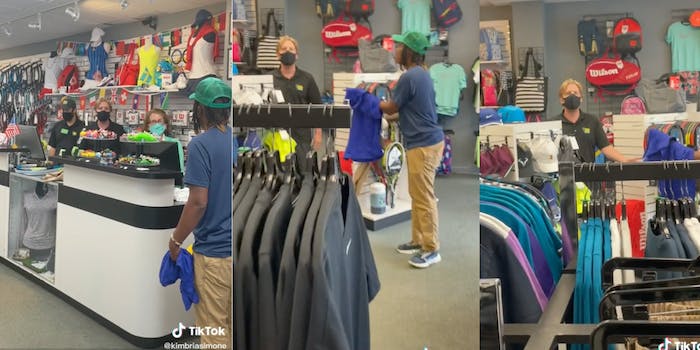 'Being BLACK is NOT f*cking suspect.'

Two Black women were racially profiled and accused of stealing merchandise from Your Serve Tennis in the Buckhead neighborhood of Atlanta, according to a now-viral TikTok.

In the first video, one of the women and a white store manager argue after he falsely claims he has video of the two women shoplifting at other store locations.

When one of the women asks the manager to show her the footage, he refuses.

In a second video, the manager tells one of the women to not put something in her pocket that she already purchased. When the woman asked for video proof of her “shoplifting,” the manager accused her of “yelling.”

A final update shows that police arrived at the store. However, it doesn’t appear they took any legal action. One of the women accused of stealing later wrote a lengthy Facebook post further detailing the incident.

“I’ve NEVER been called suspect for being black until today,” she wrote. (A screenshot of the post was shared to TikTok.) “This was definitely racially profiling.”

“This happens WAY too often, but I won’t stop until it stops. Being BLACK is NOT fucking suspect. … My friend even tried to get a business card to get [the manager’s] name and he SLAPS the card out of her hand. SMH. But no worries. Assault charges to follow.”

The woman said a store spokesperson reached out and said he wanted to “personally apologize” for the way staff behaved. After her call with the spokesperson, the woman confirmed via TikTok that the manager who harassed her was fired indefinitely.