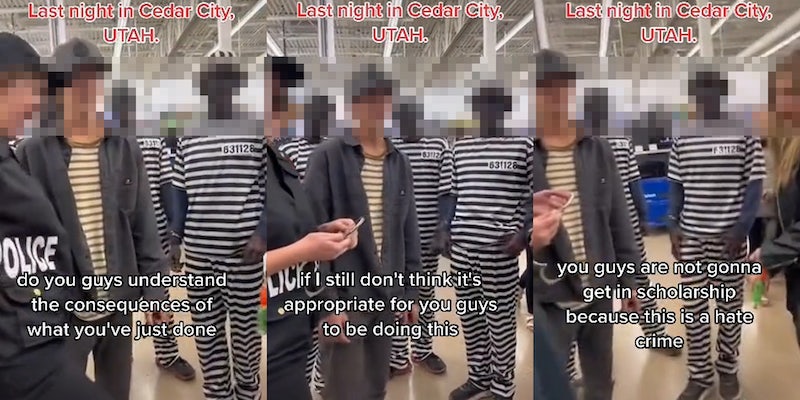 ‘You guys are not going to get into college’: Teens called out for blackface inmate costumes at Walmart

'You are going to have to live with these consequences.'

A video showing a group of Utah teens dressed up as prisoners while wearing blackface joined by other teens wearing police costumes is circulating TikTok and garnering immense backlash.

Though the original video posted by @thebrownestsugar was taken down, it has since been reposted. In a repost of the video from @freddyfazbears_tiktok, three young men are in blackface laughing as the person filming them says their costume is “really not funny.”

“Do you guys understand the consequences of what you’ve just done?” the filmer asks the group of teens, who are standing inside a Walmart. “This is a hate crime.”

The voice behind the camera tells the teens they are not going to get into college, to which they respond saying they’ve all dropped out of high school.

@freddyfazbears_tiktok This is very messed up, how could someone not see that this is wrong to do 🤷‍♂️ #fyp ♬ original sound – Freddy Fazbear

On Nov. 1, Utah Gov. Spencer Cox issued a statement on the video.

“We strongly condemn racism in all its forms and we call on every Utahn to reject such offensive stereotypes, slurs and attitudes,” Cox said, as reported by KSL, a local Utah outlet. “We must do better.”

The video was also condemned by a Walmart spokesperson and the local police department in Cedar City, where the video was filmed. Walmart also told KSL that store associates “immediately instructed [the teens] to leave the property” upon becoming aware of their presence.

@thebrownestsugar’s viral, now-deleted video of the teens was stitched many times, with TikTokers offering their commentary on the offensive display.

“Blackface is one of the most racist things you can do in America,” @destorm says in his TikTok that shows @thebrownestsugar’s video. “At this point, they might as well throw on a robe, throw a sheet over their head, and poke the eyes out. Because these are literally future racist klan members right here.”

“Not surprised, just tired,” @yakiemsgreenscreen says in his stitch of the video.

“I cannot even fathom why you children think this is?” @mermaidmamamaggie says in hers. “You are going to have to live with these consequences.”

Denise Bradley, known on TikTok as Aunt Karen (@auntkaren0) posted TikToks saying she reached out to Canyon View High School, where some of the students are rumored to have attended. Bradley says the school “won’t acknowledge that any of the kids go there.”

“We should not have to walk around and see that kind of crap. Whether it’s halloween or not,” Bradley says in another TikTok. “Our eyes are on Utah.”

The Daily Dot reached out to @thebrownestsugar via TikTok comment and Canyon View High School via email.