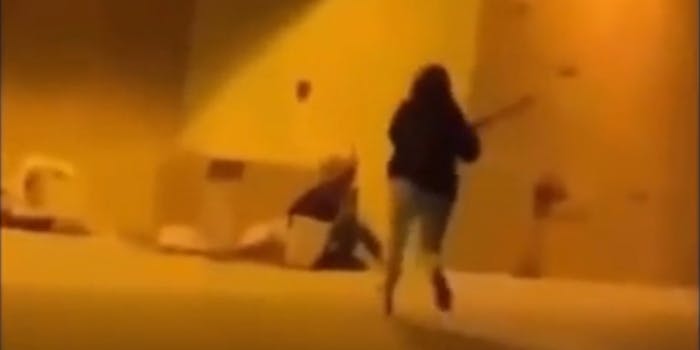 'What would drive someone so young to do something so evil.'

A video of a group of teens attacking a homeless person from late August has garnered new attention on Reddit where users are calling for justice.

The incident occurred on Aug. 27 in Spokane, Washington. In the video, a group of teens can be seen punching and kicking a person who appears to be sleeping outside of a store. The video also shows a girl picking up what looks like a bat and hitting the person over the head.

It is unclear if any arrests have been made, but the Spokane Police Department has reportedly identified the victim, according to KHQ. Police also told the outlet that the victim did not suffer any “serious injuries.”

The video made its way to Reddit’s popular page via r/PublicFreakouts where commenters expressed outrage at the violent act.

“Can’t wait to see their fucking mugshots,” one user wrote. “Never once in my life have I thought about beating an innocent vulnerable stranger. How do you raise that kind of evil?”

“Was there any explanation for this behavior beyond just ‘evil teenage shit’?” another asked. “I struggle to understand what would drive someone so young to do something so evil.”

“Just why the fuck you would do this ?” one person said. “ I dont get it…. What must happen that you beat an homeless woman that is sleeping? That is so sick…”

“We used to just get drunk and toilet paper our friends and teachers houses… not curb stomp homeless people,” a redditor commented. “Fucking clowns.”

The Spokane Police Department told KHQ on Sept. 2 that the investigation is ongoing and it expects charges to be filed. The Daily Dot has reached out to the police department for updates but did not immediately hear back.