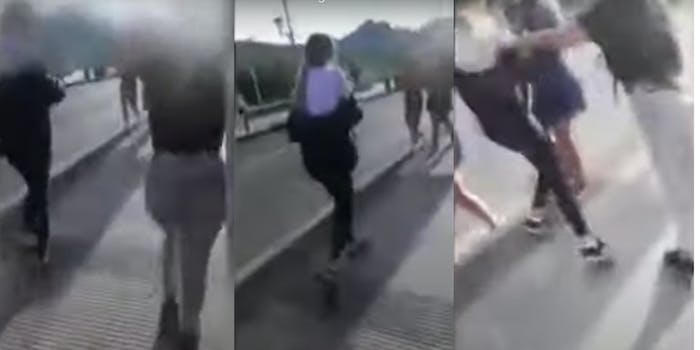 She seemingly intended to push her into a group of pedestrians.

A now-viral video captured the moment a teenager pushed her friend in front of a moving car in Spain on May 30, according to the Sun.

In the video, the teen appears to try and push her friend into a group of nearby pedestrians as a joke. However, the girl, 14, misses the pedestrians and falls into the street—right in front of an oncoming vehicle. The car hits her, and her friends can be heard screaming.

According to Nius Diario, which translated a portion of the footage, the girls apparently pre-planned the prank, with one telling the other to do it now. “Wait, not here,” one of the girls reportedly said.

Then, another girl pushed her.

The teen remained conscious throughout the incident, according to the Sun, and was later treated for minor injuries at a hospital. Local police are now reportedly investigating.

In a similar incident that was also caught on video, a teen in 2019 pushed her friend off a bridge, into a river. The teen was reportedly sentenced to two days in prison and 38 days of work.