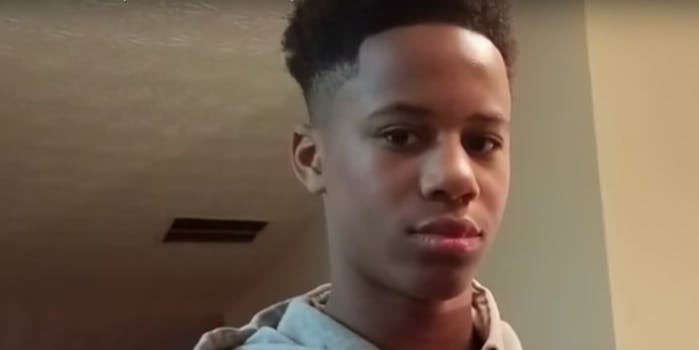 People quickly gathered at his house after the incident.

A 13-year-old boy in Georgia died on Monday after accidentally shooting himself in a video he was streaming to friends on Instagram Live.

Shaniqua Stephens, mother of Malachi Hemphill, told Atlanta NBC affiliate WXIA that her son had just taken out the trash when she suddenly heard a loud noise.

“I just knew that it was something that was wrong,” she told the station.

When she and her daughter ran upstairs and kicked down his bedroom door, that’s when they found him on the floor. “My daughter screamed and said, ‘Mom, turn his phone off!’” Stephens said. “As I proceeded to look at his phone, he was on Instagram Live.”

Hemphill later died at the hospital. “This is just a pain that will never go away,” Stephens told WXIA. “He was my only son. He was just only 13. Just the thought of me seeing him on the floor will never leave my brain.”

Stephens said that gun went off while her son was handling it on social media, and that it was an accident, not a suicide. Of the friends watching him live on Instagram, she said, someone had asked her son why he didn’t have a clip in the gun and told him to put it in. “As he put the clip in the gun, that is when the gun went off,” she said.

She estimates 40-50 people gathered outside her house shortly after the shooting, some of which were friends who had watched the incident live.

While it’s not exactly clear how Hemphill got the gun, Stephens was told he got it from a friend who got it from someone else. She said she and her husband often monitored his social media profiles and tried to set a good example, but warned other parents that despite a family’s best efforts, a bad influence outside the home can still seep through.