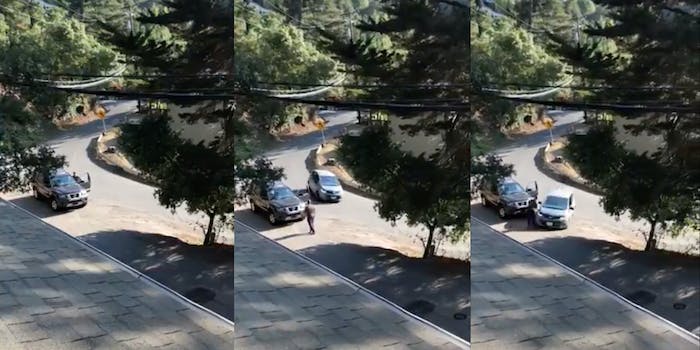 The driver nearly struck the man's pregnant girlfriend too.

A 19-year-old was arrested on suspicion of attempted murder after he was caught on video deliberately trying to hit a man with a car in Oakland, California, according to police.

Daniel Ethan Won is the prime suspect in the case. He is currently being held at Santa Rita Jail without bail.

A video of the incident shows a silver Chevrolet Bolt speeding toward a group of pedestrians, who manage to run away. As the car disappears around a corner, witnesses are heard asking if anyone recorded the car’s license plate.

Won returns minutes later, striking one of the pedestrians, Joseph Lax. According to NBC Bay Area, Lax ended up in the hospital with a broken tailbone.

“It’s actually getting more bruised now, my injury,” Lax told Fox KTVU. “It’s kind of a tough area, too. I mean, it just hurts to sit. It hurts to sleep.”

Lax’s girlfriend, Allyson Amaral, who is pregnant, said she almost got struck by the car, too.

“We’re obviously really relieved. We’re really grateful that everyone was able to come through and help us find this guy,” she said.

Witnesses of the attack say that Won threatened to kill them when they initially confronted him.

The video made its way to Reddit, making it onto the popular page via the r/iamatotalpieceofshit subreddit, where folks speculated about Won’s potential sentencing and expressed disbelief over his actions.

“There will be a moment 6-8 hours after this incident where the kid will realize this isn’t some misunderstanding, he isn’t getting out of jail anytime soon, and he is looking at a lengthy prison sentence,” one user said. “It will be a ton of bricks but at that moment he will realize he destroyed his life arguing about essential nothing.”

According to Fox KTVU, Won had a valid driver’s license and a clean record up until the incident. The Chevrolet Bolt is reportedly leased to his father, per local media.