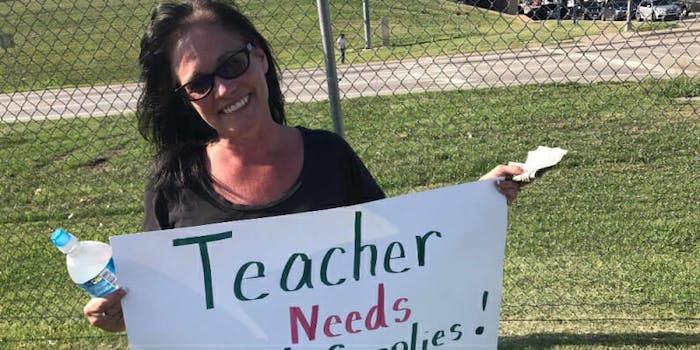 Teacher turns to panhandling to afford supplies for her classroom

She made more on the street in an hour than she does teaching.

Teresa Danks is a third-grade teacher in Oklahoma who needed money for school supplies to use in her classroom. At a loss for how to find the funds, she decided to panhandle on the streets.

Danks stood at an intersection in Tulsa on July 18, holding a sign that read “Teacher Needs School Supplies! Anything Helps.” Within six minutes, she made $55—over double what she makes per hour teaching. (Danks makes $35,000 a year, according to the local Fox affiliate.)

Recent education budget cuts have pushed Danks to pay for her own school supplies, tacking on around $2,000 to $3,000 per year to keep her classroom functioning. Items she needs for the upcoming 2017 and 2018 school year include sandwich bags, protractors, a mini-fridge, a microwave, board games, a hot burner, plastic water bottles, and pipe cleaners. And while those expenses seem low at first, gradually, they can become a month’s pay.

“It all adds up week after week and month after month,” Danks said to Fox 8. “So, it’s a huge need.”

UPDATE: Teresa has received overwhelming support! This can be attested to by the initial goal of $2000.00 being achieved…

Posted by Begging for Education on Saturday, July 22, 2017

Since panhandling on the street, Danks has turned to GoFundMe to collect funds for her supplies, as well as for other teachers in need. Though the original goal was $2,000, over $3,000 has been raised in just four days. Going forward, Danks plans to bring awareness to teachers’ struggles, including having to pay out of pocket for costly supplies and fighting for fair wages.

“After much thought and consideration, Teresa has decided to increase the gofundme campaign goal to be inline with her new and evolving goals that include her desire to help teachers in other classrooms get the supplies they need to create the best learning environment possible,” Danks’s new Facebook page, Begging for Education, announced on Saturday. “The amazing support she has received has humbled Teresa and she is wanting to once again extend her gratitude for all of the donations, supplies, and words of encouragement.”