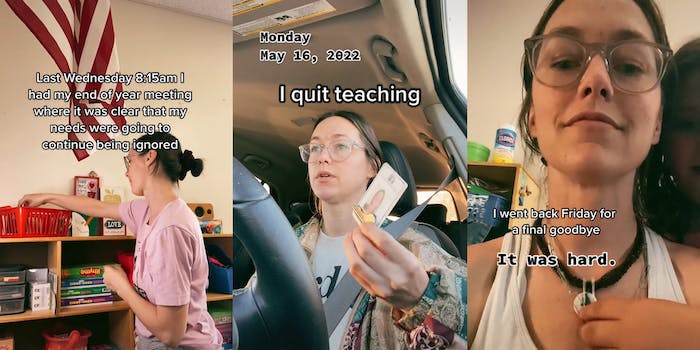 ‘We just can’t do it anymore’: Teacher quits her job in viral video, sparking debate

'There are soooo many wonderful teachers leaving.'

It’s hard to argue that working as a teacher in the United States isn’t, in many instances, a thankless job. Instructors’ salaries have long been considered unequal with the sheer amount of job responsibilities teachers take on.

Although there have been pay increases, these haven’t matched the rate of inflation. Then there was the COVID-19 pandemic, which forced teachers to adapt their entire model of instruction to adapt to online learning. This presented a litany of new challenges and expectations, and through it all, they were still expected to have their students hit the same milestones and satisfy requirements as if they were being taught in a traditional classroom model.

While navigating all of these changes and enforcing curriculum that are decided by standardized testing requirements, teachers are expected to also act as bureaucrats, all for a low salary while dipping into their own pockets to deck out their classrooms with supplies.

So, it shouldn’t really come as a surprise that there are so many teachers who are choosing to quit their jobs en masse. This is a problem that’s been brewing for quite some time, and TikToker @reaganmillerrr_ is just one of many teachers who are handing in their keys and leaving the classroom for good.

In a viral TikTok video set to Rusted Root’s “Send me on my Way,” Reagan writes in a text overlay: “Last Wednesday 8:15am I had my end of year meeting where it was clear that my needs were going to continue being ignored. I was barely able to return to my room after I left that meeting. I took the next day off to think things over but I knew it was over.”

In the clip, she cut between several different videos of her in her classroom and playing with a baby outdoors on a plastic see-saw toy.

She wrote, “I went back Friday for a final goodbye. It was hard.” In the clip, a child who appears to be one of her students puts a necklace on her and tells Reagan, “It looks great.”

The former teacher continues with another text overlay: “I moved my things out over the weekend and am happy to be moving on.”

Commenters on Reagan’s video were divided. Some believed that the TikToker was abandoning her students just because the job got tough.

“Typical of people today when things get rough you quit,” one viewer said.

However, there were others who were not only shocked to see her post, but who also said that they too ended up quitting their teaching gigs.

“I can’t believe my favorite tiktok teacher had to quit. I feel like this is a sign, I’m freaking out,” one user wrote.

“I’m so sorry. I have enjoyed your calm and relaxed relationship with the kids. It’s different than my own so I was always learning… blessings,” another said.

“I left at the end of the year last year. It is hard, but worth it. My mental health and work life balance is better, and my new career is amazing!” a third viewer argued.

“I also quit. Hardest choice I’ve ever made, but my mental health has definitely benefited from it. No clue where I’m going next, but feel better,” another former teacher wrote.

“There are soooo many wonderful teachers leaving. We just can’t do it anymore,” one user said.

Then there were some commenters who remarked that there were “mass exodus[es]” of teachers occurring in specific regions, claiming that some instructors decided to stay in their positions simply to collection pensions.

“Mass exodus is happening in PA. Most teachers I know now are only staying because of their pensions. It’s rough,” one viewer wrote.

There have been several studies conducted on mental health issues teachers have developed during the COVID-19 pandemic, in addition to typical problems that usually develop during the course of teaching in general.

The Daily Dot has reached out to Reagan for further comment.