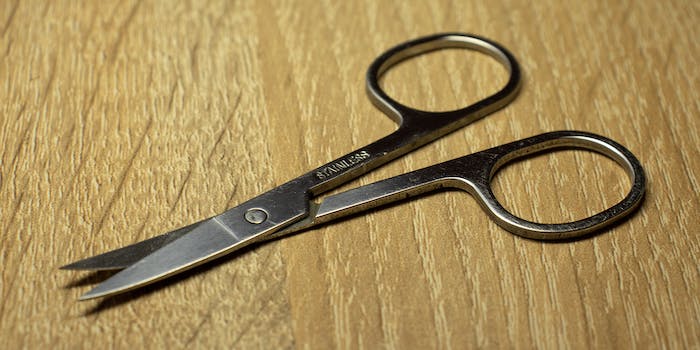 A Michigan father moved his 7-year-old biracial daughter to another school after a classmate and a teacher cut the child’s hair in two different incidents.

According to the Associated Press, on March 24, Jimmy Hoffmeyer’s daughter Jurnee came home from Ganiard Elementary with her curly hair cut to her shoulder on one side. She told her father that a classmate cut her hair on the school bus with scissors.

Hoffmeyer told the Associated Press that he made a formal complaint at the school, and Jurnee’s hair was made symmetrical at a local salon.

However, two days later, the girl arrived home with her hair cut again; this time, a library teacher cut her locks down near the scalp. The unidentified teacher had done so without permission.

“She was crying,” Hoffmeyer said. “She was afraid of getting in trouble for getting her hair cut.”

“I asked what happened and said, ‘I thought I told you no child should ever cut your hair,'” he continued. “She said, ‘But dad, it was the teacher.’ The teacher cut her hair to even it out.”

When Hoffmeyer talked with the school’s principal, he was told that the librarian would not receive a significant punishment.

“She said she didn’t have the authority to do anything,” he recalled to the Associated Press. “She kept asking me what she could do to make it go away.”

“I got mad and hung up,” Hoffmeyer said. Hoffmeyer, who is Black and white, says he is “not one to try to make things about race.” (Jurnee’s mother is white.)

“I’ve pretty much grown up with only white people, myself,” he reportedly said.

Many have commented on the ideas about black and biracial hair, including the sociopolitics behind white people’s adjudication of Black hairstyles.

One Twitter user said the incident was “assault” with legal precedence. In 2012, more than 12 members of an Amish community were convicted of hate crimes after cutting other Amish men’s beards, which have religious significance.

Another user wrote, “How does a teacher just decide to cut another parent’s child’s hair without being granted permission to do so? How rude, disrespectful, and really disgusting is that.”