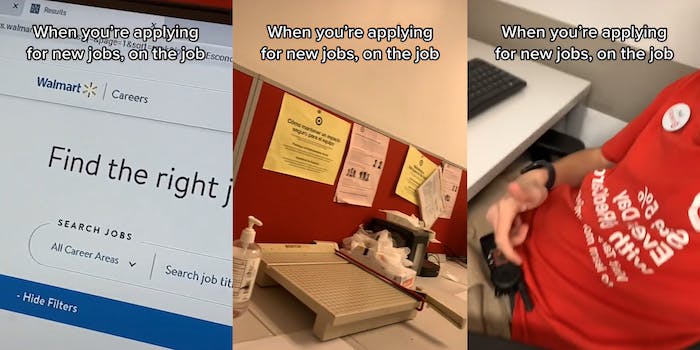 ‘Don’t do it man it was the worst job of my life’: Target worker applies to Walmart from a Target computer

There’s an old adage that says finding a job is itself a full-time job.

While one has the option to apply to thousands upon thousands of open positions at any given moment at any time of day as long as they have an internet-connected device with a web browser, it’s an extremely time-consuming process.

So it’s understandable why so many people will apply to new jobs while they’re working at the job they’re currently at, which is exactly what TikToker @gabephill did in a now-viral TikTok that shows him searching Walmart positions from a Target computer.

“When you’re applying for new jobs, on the job,” the text overlay reads.

@gabephill If anyone from #target sees this, I was on my lunch when I made this😉 #targetfulfillment #targetemployees #targetrun #walmart #worklife ♬ Love You So – The King Khan & BBQ Show

He wrote in the clip’s caption that “If anyone from #target sees this, I was on my lunch when I made this,” followed by a wink emoji.

The video was posted on May 8 and was viewed 388,000 times. Many commenters commiserated with @gabephill’s decision, saying they did the same exact thing.

“I got a new job while on the job,” @mrstealurtoast remarked.

However, there were other TikTokers who thought that the decision to move from Target to Walmart was a “downgrade.”

“Hell nah i went from walmart to target best thing ever.. my target caters food to us every friday,” another wrote.

But then there were others who commented on the TikTok who said that they were happier moving from Target to Walmart. Some said that the atmosphere was more “laid back” at Walmart, even though they received lesser pay.

Experiences from specific retail locations seem to vary, however, as there were others who said that they were getting paid more at Walmart. So it appears that it really just matters who the management team at an individual store is and how they treat their employees.

There’s another retailer’s name that was mentioned that has a great employee satisfaction track record: Costco. It’s been called “America’s favorite workplace” and provides a number of benefits for its workers including health, vision, and dental insurance for employees who work a minimum of 23 hours a week.

Walmart raised the base pay for its employees in September of 2021, setting an average rate of $16.40 for all of its workers. In some markets where the cost of living is decidedly higher, the mega-retailer is offering employees more than that. The chain reportedly started some 20,000 employees in the third quarter of 2021 at $20/hr to work in its warehouses.

Target now has set a wage range for its workers from $15-$24 an hour commensurate with experience. It’s not difficult to imagine however that job-seekers looking for employment with the red-and-white brand would be able to negotiate for the higher end of that wage range, given that there are still so many unfilled jobs in America.

The Daily Dot reached out to @gabephill via TikTok comment.