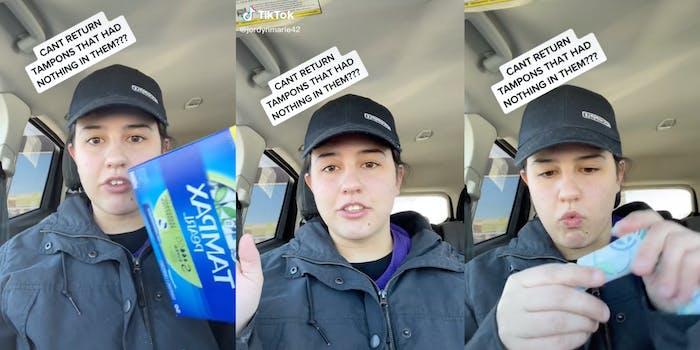 ‘All of the dispensers had nothing in them’: TikToker says Target refused to refund her for defective box of Tampax tampons (updated)

One viewer suggested she 'talk to corporate or go to another store.’

A TikToker recently claimed that a box of Tampax tampons she purchased at Target were nothing more than a box of empty dispensers.

Jordyn (@jordynmarie42) said she spent $10 on the tampons before she realized they were empty. But when she tried to make a return, she said she got denied because Target allegedly can’t accept opened feminine hygiene products.

“All of the dispensers had nothing in them,” Jordyn said in her video. “Literally, every single one.”

Even pleading her case to a Target manager apparently did no good. Jordyn said that she was denied after opening up the box in front of them. And, as a result, she had to spend another $10 on tampons.

“Literally wtf,” she captioned her video. The TikTok has over 850,000 views and thousands of comments.

Target’s online return policy makes clear that most unopened items sold in their store “in new condition and returned within 90 days will receive a refund or exchange.” The website doesn’t say anything explicitly about feminine hygiene products, nor what to do if someone purchases an unusable item from one of their stores.

In a comment on Jordyn’s video, Tampax said they’ve “escalated this internally and want to make this right.”

“This is not okay!” the brand wrote. “We’re so sorry this happened.”

Others, however, said they were shocked to hear that Target wouldn’t give her the money back since the store typically implements a lax return policy.

“I worked at Target for years. You can 100% return anything,” said one viewer. “I’d talk to corporate or go to another store.”

“TARGET LIED!!!” wrote another TikToker. “I used to work there and we took anything back that had a receipt.”

In a follow-up comment, Jordyn claims that she did get a refund—but it’s unclear whether it came from Target or Tampax. She thanked Tampax for helping her resolve the issue.

The Daily Dot has reached out to Jordyn via TikTok comment and Instagram direct message, as well as to Target by email.

Update 7:32 am CT, Jan. 23: In a statement to the Daily Dot, Jordyn said she got a refund from both Target and Tampax. She also said Tampax gave her a year supply of tampons.

However, she said she was offered a free menstrual cup from Diva Cup after this incident, so she will be donating her tampon supply.

“I’m planning to donate a majority of the tampons I receive to local homeless shelters and to those who can’t afford feminine hygiene products,” she said.