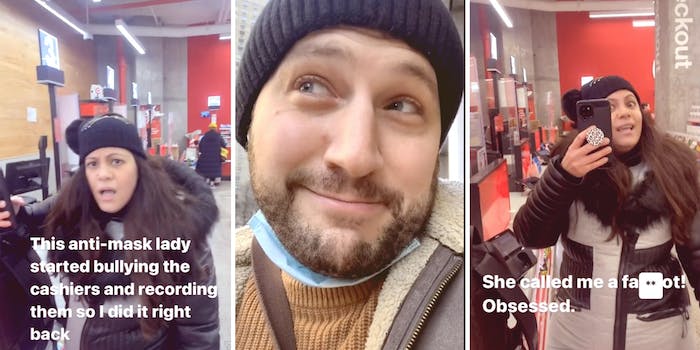 A viral TikToker exposed a woman at Target in New York City for berating store employees and refusing to wear a mask. He dubbed her a “Target Tammy.”

The TikToker (@rossisfunny) uploaded footage of Target Tammy, captioning the video, “These poor cashiers who literally do not get paid enough to be doxed by this woman for just doing their jobs.” The video received about 663,000 views and nearly 5,600 comments on TikTok as of Wednesday. Ross has nearly 34,000 followers on the platform and is known for being funny and giving advice.

“This idiot is bullying the cashiers because she doesn’t want to wear a mask,” Ross said in the video as he recorded Target Tammy, who can be seen recording the cashiers. Ross said she was streaming on Instagram during the exchange.

Target Tammy turned to ask Ross “So fucking what?” before turning back to continue recording and talking to the employees. The two talked loudly over each during the video clip.

“Oh my God, do it again. I love that, I’m obsessed with that,” Ross responded.

After leaving the store, Ross revealed “the best part” of the interaction, which was that he took her ear buds.

He said that when Target Tammy “started getting huffy” he saw the ear buds slip out of her purse. At first, he considered getting her attention to make sure she didn’t lose them, but once he saw her behavior, he changed his mind.

“While she was on her little tirade, and standing up for her rights or whatever, I just picked them up and I just took them,” Ross said, showing the camera the pair of ear buds. “And so this bitch will not have any music and will have to buy new headphones. Signed, a f****t.”

“no wonder everyone is quitting their jobs, not enough money in the world to deal with people like this,” one viewer commented on the TikTok.

Several viewers applauded Ross for taking the ear buds, and some viewers from New York City noted how much this would impact her day.

“As someone who used to live in Ny. Taking the headphones is like losing a limb. I love it!!!” one viewer wrote.

“Not the earphones LMAOOO,” another user said.

One TikToker commented, “LMFAO THE HEADPHONES. she’s onna have to think about what happened in silence.”