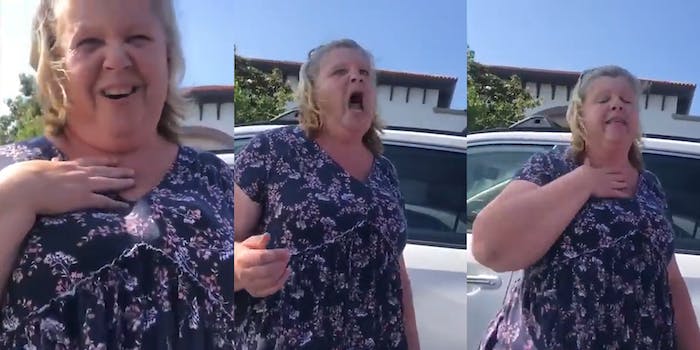 At first, she says that she wasn't there and feigns ignorance.

A viral Reddit video shows a “Target Karen” trying to defend her daughter’s racist comments during a recent tangent.

A woman saying she’s “75% Mexican,” who approached Target Karen about the racist comments, managed to get the nasty conversation on a camera phone. The video starts with them collectively asking why the woman’s daughter called one of the Hispanic women a “wetback.” At first, she says that she wasn’t there and feigns ignorance. But then, Target Karen decides to gaslight the Hispanic women, calling one of them “coddled.”

“‘Stick and stones,’ my dear,” she says condescendingly. “[You’re] never gonna learn about ‘sticks and stones.'”

She says that her daughter’s slur was not racist. Then she admits to calling the Hispanic woman’s mother “a cunt,” but downplays the name-calling because one of the Hispanic women’s children had run into the path of the Karen.

“If you would’ve been paying attention to your own son, then it wouldn’t have been a problem,” she explains.

The Hispanic woman with the phone explains that the boy is autistic; however, Target Karen is unfazed.

Escalating matters, a Target security guard arrives. The Karen tells the man to move out of her way. The video ends with her hurrying toward her vehicle.