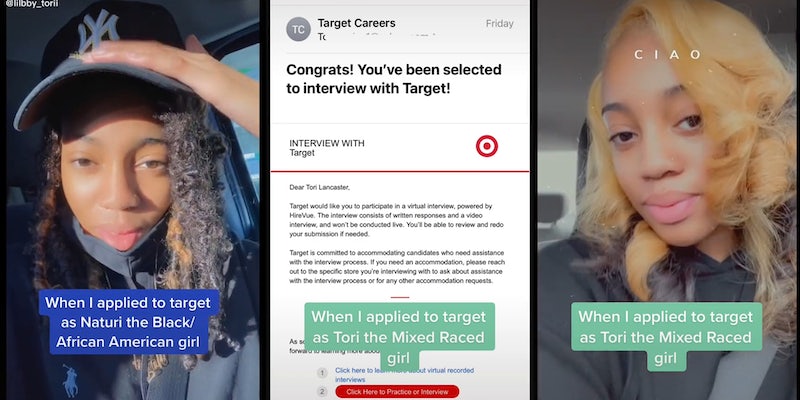 Woman says she applied to Target as a Black girl, got rejected—applied again as mixed-race, got to second stage

'Do I hear a lawsuit coming?'

A TikToker says that after applying to Target for a job and listing her race on the application as “Black,” she was rejected, but when she re-applied using a different name and marking her race as “mixed race,” she was reportedly invited to interview for the job.

TikToker @lilbby_torii posted a TikTok about her experience applying for a job at Target on July 11. In it, she says when she applied using the name “Naturi,” as “the Black/African American girl,” Target rejected her application. When she applied as “Tori,” a mixed-race applicant, she claims Target asked her to interview for the job. The TikToker includes screenshots of what appears to be her rejection and interview offer emails from Target.

“I always wondered if I l changed my name and race would I get hired,” @lilbby_torii wrote in her video’s caption. “We got the answer.”

She also clarified that she submitted both applications to the same store and that the only differences between her applications were her race and name. On Tuesday, @lilbby_torii’s video had almost 180,000 views.

@lilbby_torii I always wondered if i l changed my name and race would i get hired..we got the answer ! I used the exact same application and applied to the same store but my name and race was changed. #racist #fyp #target ♬ original sound – cvmgvzzler

Commenters on @lilbby_torii’s video shared their experiences categorizing their race on job applications.

“I put yt on everything,” @dessyc23 commented, “I want them to prove me wrong.”

“I put my race as black at first and got denied. Had an interview when I put mixed and I didn’t even want it anymore,” @cheriekissessss wrote. @lilbby_torii responded to the comment, saying that this experience is “universal.”

“I was applying at target for years as a black girl, put my race as white ONCE and I got the job DURING A PANDEMIC,” @skyethecancer commented.

Other commenters discussed the concept of a lawsuit against Target.

“I’m wondering why has no one [filed] a lawsuit against Target,” @rossholland commented.

The Daily Dot has reached out to @lilbby_torii via TikTok comment and Target through email.