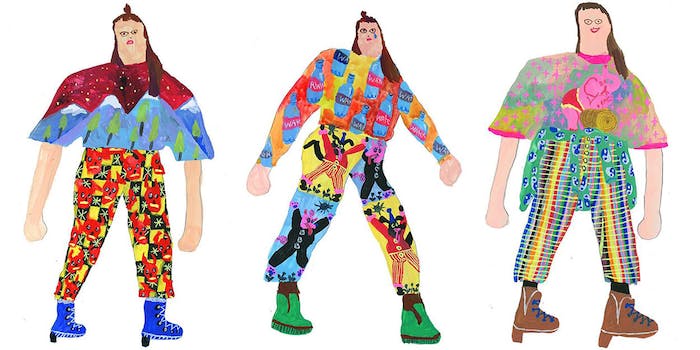 Booth isn’t showing us the neat packaging of a victory story.

There’s a freeness to Tara Booth’s work that recalls the joy of scribbling outside the lines with a jumbo-sized crayon in your favorite color.

Booth is a traditionally-trained painter and art school grad based in Philadelphia. She could aim for perfection, but instead, she creates cartoons that are intentionally messy in content and form. Booth addresses body shame, battles with mental health, and substance abuse with bold colors and imperfect lines.

Lol ew, why is my inner critic this “flossing” bro though?!

The star of Booth’s comics, which she posts to Instagram daily, is a clown-like version of herself. The character is always recognizable: She sports a tiny bun atop her head, wears loud mismatched prints, and contorts her large, amorphous body into pretzel-like shapes. She often bends over and grins at the viewer from between her legs, like a child who is happy to have been caught misbehaving.

5 more original paintings posted on my website! Link in bio. $200 each… feel free to reach out about **paid** projects, illustrations, collaborations, etc. Im open to whatever— just trying to keep a steady income so that I can continue to work full time as an ~artist~ . see you at CAB! <3

In some ways, Booth’s art is an act of rebellion. “My parents have always made me feel a little ashamed about, one, going to art school, and two, talking about mental health issues,” Booth told the Daily Dot. Prior to attending art school, she considered a career as a psychologist. When she graduated from art school, she suffered from creative shame. “I still had this guilt like ‘Who am I making these paintings for? What is it doing for the world?’ And then I felt like, maybe there’s a way I can give it a purpose.”

Booth began sharing art that addressed the things she had been warned not to discuss: her body, her mental health. And she soon gained an audience.

Her first semi-viral moment happened in 2016, when she posted a portrait of herself grappling with the challenges of peeing in a romper.

Overnight, Booth found that she had over a thousand new followers on Instagram. Those numbers have been steadily climbing ever since. She now has over 96,000 followers.

According to Booth, revealing the less polished parts of herself has been key to her popularity. “I feel like it’s the opposite of what most people experience through Instagram,” she says. “It’s a place where you go and feel like shit about yourself compared to other people. But I’ve found it’s a place where I can share the parts of myself that I’m not proud of and people will say, ‘Hey, I actually love you for that.’”

At the same time, Booth doesn’t necessarily feel as though she’s “made it” as an artist. As a classically trained painter, she hopes to be seen as such in the future. She envisions herself creating larger scale paintings.

The colors and lines of Booth’s art often mirror the exuberant openness of her content. If sharing her personal struggles was an act of rebellion against her parents, her artistic style could be seen as an act of rebellion against the norms she was taught in art school. When she first graduated, Booth said, she had trouble wanting to create at all: “I felt artistically constipated. I didn’t want to create anything because there were so many rules… I kind of just wanted to get rid of all this extra weight and be totally free to make work. And that developed into a really exciting style on its own.”

As her followership has grown, Booth has learned to take risks with what she shares. Some of her artwork explores broad relatable themes, like the woes of trying on a swimsuit.

It’s that time of the year again!!!! Cept this summer I want @maraboulingerie to make suit #3 for me in cow print.

And Booth sometimes dips into more vulnerable territory, expressing painful experiences like dissociation, or being unable to parse whether someone who’s saying kind things secretly hates you.

Booth has also shared openly, and humorously, about her journey to recovery. She quit drinking cold turkey in 2018, and she has since realized she still has an unhealthy relationship with other substances. She is currently seeking treatment at a rehab facility, and she’s OK with her followers knowing about it.

Vulnerable, diary-like Instagram accounts are growing in popularity. Whether it’s an influencer opening up about anxiety, or a teen bearing their soul on a finsta, opening up about mental health has made its way into mainstream social media use.

According to longtime fans like Grace Spelman, Booth stands out for her authenticity. “People are talking … more [but] there’s still an avoidance of the dirty, unpleasant, parts of mental health. It still feels a little glamorized to me,” Spelman told the Daily Dot.

Booth’s art, on the other hand, leans into what might be deemed too ugly or shameful for public consumption. “She did a comic about going back into the trash to get a piece of cake and I’d just never seen an artist with a platform speak about that sincerely,” Spelman said. “Tara does art about the things of which I am deeply shameful. And that, in turn, makes me feel less shameful.”

Booth isn’t showing us the neat packaging of a victory story. Instead, she bravely lets us look at her process. Like a birthday party clown, Booth’s art cartwheels across her feed, showing us trauma and unhealthy patterns from diverse angles. She costumes her struggle in humor that carries an empowering message. It’s as if she’s telling us that we’re allowed to have fun, to play, and to celebrate, even if we are still in the midst of suffering.