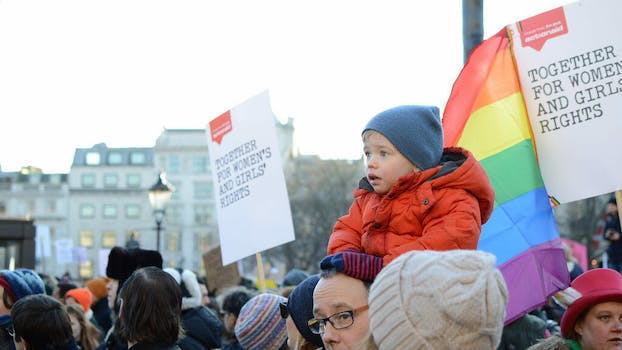 Why I protest with a fussy toddler

Your kid might not have clue what's happening—but it doesn’t mean your family isn't getting something out of marching.

Before dragging my toddler into the throes of midtown Manhattan at the March for Science, I wanted to make sure there wasn’t anything I hadn’t considered. So I did what any 21st-century parent would do and Googled “bringing baby to protest.”

However, outside of a few posts about how to explain to children what a protest is, I couldn’t find any sound advice. This, honestly, was a relief.

Much of parenting is instinct. But because parenting is also a responsibility most people don’t want to fuck up, they’ll often second guess themselves. Ask anyone who ever fell down an internet hole over breastfeeding or stages of development, and they’ll tell you that the web was made for you to cast aside what you innately know is true and instead fill your head with fear, shame, guilt, or inadequacy about the kind of parent you are. It took me all of three months of my son’s life before I swore off ever Googling a baby-related thing again.

Still, I’m not immune to worry and I really do hate messing up, especially when my kid’s safety is involved. So I got online. Then I went ahead and winged it anyway.

Having been to a handful of protests in recent months, I knew that there was little risk of violence breaking out, that there’d be a large but non-threatening police presence, and that we’d be surrounded by tons of considerate protesters who’d never let anyone push over my stroller or run off with my baby. My gut, combined with common sense and reason, told me it was cool to bring my son.

I could spend the next 800 words explaining what to pack and what techniques will make your protest peaceful for baby, adding to the lackluster “bringing baby to protest” search results, but instead I’ll summarize my advice in one long sentence: I brought a stroller (but if your back is better than mine and you prefer a carrier, by all means, use that instead); two fruit smoothie pouches and a Ziploc of cereal (but if you’re less lazy than I am, bring something homemade); and a pacifier (but if your kid doesn’t need this to sleep—because protests often happen during peak afternoon napping hours—then bring whatever tool soothes your baby when they’re fussy). End of list.

There is no secret advice to protesting with a baby. Leaving your house for an extended period of time requires variations on the above essentials, regardless of where you’re going. (For parents who need to change diapers, breastfeed, or pump, there are apps that will show you where to find the nearest public restroom.) Taking a child into midtown, bless you, will always demand you to find the rhythm of pushing a stroller without bumping into the heels of slow walkers while trying not lose your shit.

But what I find more useful sharing is why I took my son to protest. It wasn’t because I wanted to instigate discussions about the importance of science or the need to stand up for our basic human rights. He is 22 months old; he has no understanding of politics or the difference between walking through Times Square with people concerned about climate denial or with goofy tourists on a Wednesday. The greatest thing he got out of it was a tchoo-tchoo ride over.

I took him because I wanted to go. A large part of early parenthood is spent trying not to lose yourself.

If you’re a parent who works full-time, it is very easy to talk yourself out of leaving your house on a Saturday morning with a bag full of supplies and squirmy toddler. It is much easier to lie on the floor, building a Lego fortress while intermittently chasing said toddler around the living room.

While succumbing to weekend malaise isn’t just a conundrum for parents, once I had a kid, I became very, very aware of how few opportunities I had to do things with my son that I used to do without him. It is enough to make me waver between panic and resignation on any given day.

But mostly, I’ve adapted. When our son was 5 months old and still napping every two hours, my husband and I could drag him out to eat and have a fairly peaceful conversation, maybe even guzzle two whole drinks, without much interruption. When he was 8 months old, I could sit him on a picnic blanket with an empty water bottle and he’d be entertained while I chatted with my friends. But now that he’s almost 2 years old, good luck trying to get him to sit still in public ever. Unless, maybe, you strap him into a stroller about 30 minutes before nap time and pray he gets lulled to sleep by the motion of forward movement and protest chants.

To be clear, I’m not saying that parent-centric activities should always supersede kid-centric ones (today you protest, tomorrow you take your kid to the playground), but it’s very easy to give into those sanctimonious mommy blog pressures to only do for your kids and forget you have interests too—not to mention, that your community and planet would also like your attention.

Just as it is important to make time for intimate dates with my husband and friends, I need to take whatever actions I can to stand up for human rights. And since my schedule only allows for flexibility, I call senators at lunch, email retailers about boycotts in the evening, set up monthly donations to charities whose work I believe in, and protest when the timing works out.

Protesting is part of my activism as much as it part of my mental health routine. Instead of just thinking about the world and all its various issues, I can get out my head and physically move my body and shout the change I want to see. In the process, I get to be one more person in a mass, showing that people will not stand idly by while the government tries to roll back equality, science, progress, and human rights. As a white-presenting straight woman with a child, I want to show up and demonstrate that this isn’t just a fight for marginalized people to fight; it’s for everyone.

And if there is a teachable moment for my tiny son, then perhaps it would be that doing stuff for his parents, for others, is something he needs to make room for—even if it’s just for 20 seconds at a time. At 2 years old, he is learning that he can’t get everything he wants by whining, and we are both learning to negotiate no’s and cookies and when it’s fine to give into a 10-minute video of “Wheels on the Bus.” My son may be my largest responsibility, but I’d like to introduce him to a world that does not revolve around him.

If I could estimate, parenting a toddler is 90 percent finding the balance between catering to your sanity and catering to your kid’s. I still fight the guilt of not spending every moment with my son in “active” engagement. But when I stopped his stroller in the middle of Broadway to make a silly face and he giggled, then stopped again five minutes later and saw he was asleep, it reaffirmed that he was OK with an afternoon of rolling through the city. And if he wasn’t, we could’ve always packed up and left.