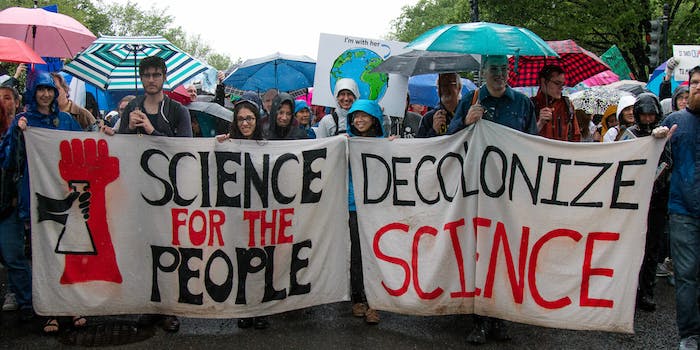 53 memorable photos from the March for Science

These are the people who set the scene and showcased the best signs.

Tens of thousands of activists and concerned citizens gathered in Washington, D.C.—and around the country—on Saturday for the March for Science to celebrate Earth Day and protest the policies and “alternative facts” of the Trump administration. While activists and critics both agree that science shouldn’t be a party issue, the crowd—activists, teachers, and yes, plenty of scientists—clearly took issue with the Trump administration’s policies and general attitude toward the environment and issues like climate change.

Here was the scene in Washington on Saturday and the reasoning from some of the people who took part in trying to make their world a better place.

“I’m a school nurse, retired, and I have some friends that work in EPA and I heard their concerns … and I think it is something that people need to be aware of, a lot of issues that are at stake and because of a lot of budget cuts, a lot of people can get hurt. That’s why we’re here.”

“I’m a museum educator and a science communicator. I work in a museum in California. I studied geosciences, and I’m really passionate about volcanoes and volcanology. It’s something I’d like to pursue further. I’m dressed up as a stratocone today because it is the quintessential volcano. If you think about Mt. Fuji, if you think about the Cascades, that’s exactly what a stratocone is. They’re marked by really highly explosive eruptions. They’re really really compelling and really incredible volcanos. They’re pretty badass.”

Here are 49 more memorable photos from the March for Science.