Taco Bell isn’t just keeping itself busy by filling up stomachs with Crunchwrap Supremes and Doritos Locos Tacos. The company is also working to make sure students finish high school and achieve their potential.

On Wednesday morning, a group of about 60 students gathered in Viacom’s TRL Studio for a special event as part of Graduate for Más hosted by MTV News producer Sway Calloway.

In most respects, the ceremony was reminiscent of any normal high school graduation, complete with the standard motivational speeches and celebration of AP classes taken. But unlike most other commencement ceremonies, it featured a lunch catered by a Mexican fast food company and students duking it out in a lip-sync battle to Nicki Minaj and Beyoncé’s “Feeling Myself”. And it was all in the studio that once hosted such musical legends as Tom Green and O-Town. 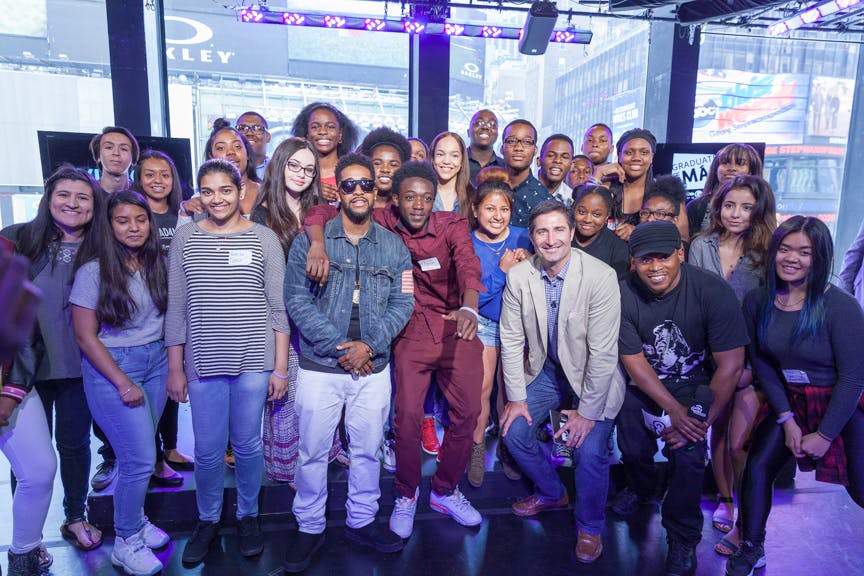 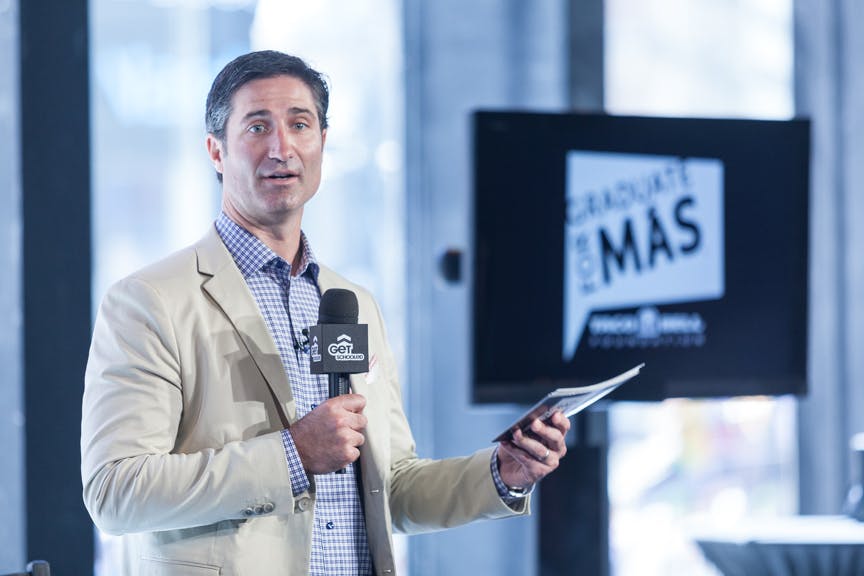 Taco Bell CEO Brian Niccol, who served as a dean of sorts, delivered the standard words of encouragement to the graduates.

“On your journey make sure you’re grateful for those around you supporting you, take the time so say thank you,” Niccol said. “And share your voice. Be impactful. Be grateful.”

Niccol also surprised the teenagers at the event with $1,000 scholarships. Other students who participate in the Graduate for Más program but weren’t at the event would also be getting money to help support their educational pursuits.

Surprise celebrity guest Omarion of ’00s-era R&B group B2K fame was also on hand to talk about his road to success. The singer told a story to the graduates about using his first paycheck to buy a chain that he wish he would’ve invested instead. He also discussed his road to self-funding his latest project, Sex Playlist, which he used as an opportunity to promote the album. 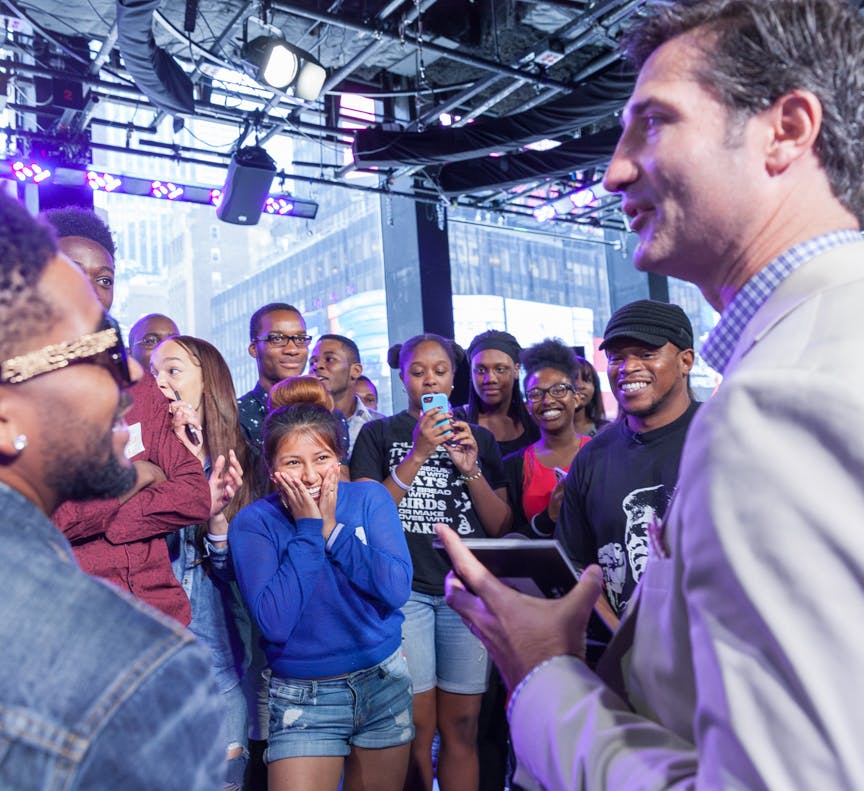 Once the dust settled and the music ended from the lip-sync battle, the winning group was awarded some gaming consoles. But they seemed more interested in taking a group photo with Omarion.

After lunch, teens got to see photos of themselves and descriptions of their accomplishments in the middle of Times Square, as part of a Taco Bell-sponsored “digital yearbook.” Although there were only about 60 students at the event, more than 600 teens were spotlighted on the virtual yearbook.

Graduate for Más was launched in 2013, as part of a joint venture between the Taco Bell Foundation and the education nonprofit Get Schooled, which is dedicated to making sure teens graduate from high school. This year, Taco Bell used the program as the culmination of its #RecognizePotential marketing campaign, which is aimed at helping teens graduate from school.

When teens don't graduate, potential goes to waste. Tag a friend to spread the word and check the link in our bio to learn how to help. #RecognizePotential

While the Taco Bell Foundation’s endeavors for education might sound heartwarming, the company has faced criticism for sponsoring school lunch programs across the country, resulting in high schoolers eating high-calorie meals with little nutritional value. A 2006 study, for instance, indicated that 23.5 percent of high schools served food from fast food chains like Taco Bell and Pizza Hut.

Taco Bell also drew criticism earlier this year for delivering more than 6000 tacos to congressional staffers to thank them for their work on behalf of the fast food industry. The effort was widely seen as a way to keep lawmakers on the company’s side by encouraging them to pass bills to relieve franchisees from having to provide health care for certain workers, or blocking attempts to raise the minimum wage.

But according to Nation’s Restaurant News, the foundation has committed more than $75 million to scholarships and initiatives since 1992. Get Schooled, a national non-profit, has a similar vision. It leverages the key influences in teens’ lives to motivate them to stay committed to finishing high school and enrolling in college.

Prior to the Graduate for Más Times Square event, high schoolers at approximately 1200 schools across the country pledged to graduate via the Get Schooled website for the Graduate for Más challenge. Student ambassadors encouraged their peers to make the promise to graduate and participate in online college prep activities such as reading articles on scholarships and submitting poll answers, which earned them points. The students also got points for taking quizzes about “Financial Aid IQ” and playing games like “Zombie College.” 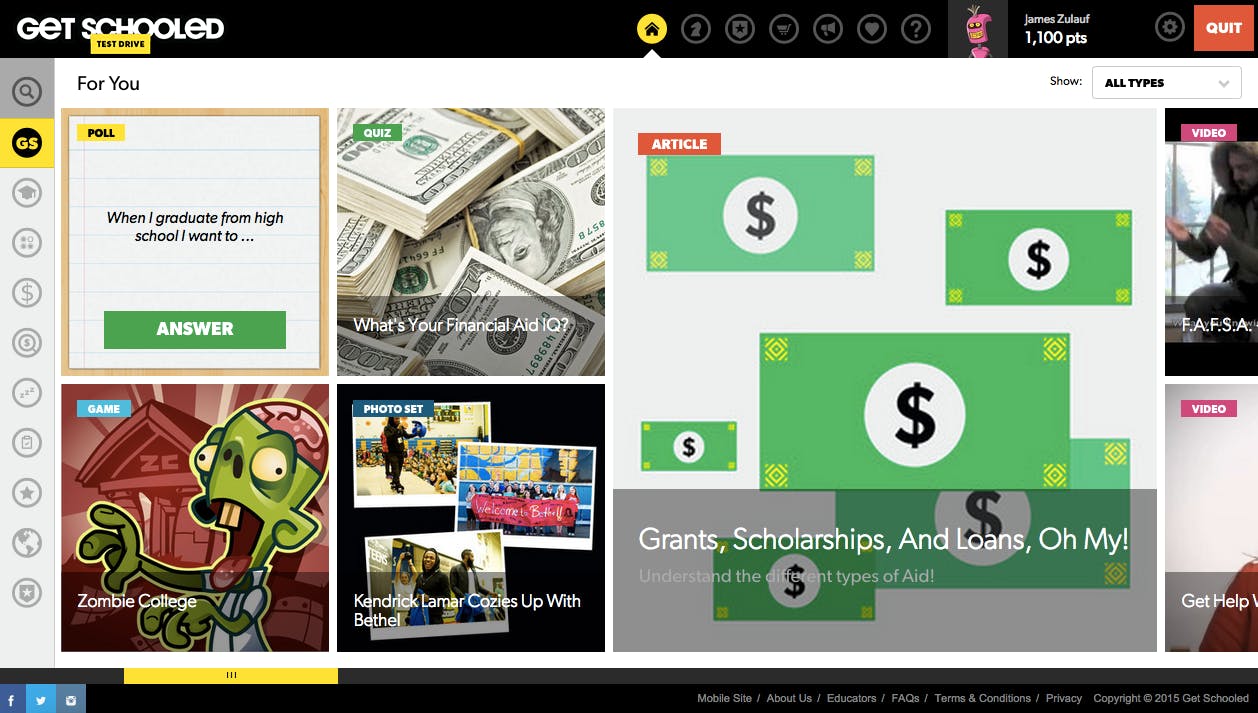 Ultimately, Compton High School won the Graduate for Más challenge by getting 100 percent of their student body to pledge and scoring the most points on Get Schooled. As part of their prize, hip-hop artist Becky G came out to their school to help celebrate.

Two of the student ambassadors that were pivotal in making sure Compton High won were at the Times Square event, Luis Miranda and Noemi Covarrubias. It was both their first times to New York City.

To help promote and get the word out about pledging to graduate and the Get Schooled Activities, Miranda and Covarrubias posted on their school’s government Facebook page to get the word out. But they also went old school, visiting classrooms and using sandwich boards to get people to participate.

Social media and connecting online was vital for Graduate for Más ambassadors to connect with the rest of Compton High to take the crown, as well as for Taco Bell to get the word out about its #RecognizePotential campaign.

Hey, grads. Show this pic & your high school ID today at a Taco Bell to get one free DLT. http://t.co/jkahTrfD73 pic.twitter.com/XmwIWryO7z

Taco Bell has a huge social media presence, with 1.57 million followers on Twitter and 9.9 million likes on Facebook. The company is particularly well-known for using youth and meme culture to promote its brand, using lingo like “bae” and “squad” on its Instagram account. YouTubers like Tyler Oakley and iJustine have also served as de facto Taco Bell ambassadors, teaming up with the company to promote various Taco Bell Foundation teen-oriented initatives.

Taco Bell was also one of the first brands to jump on Snapchat, an app that has become more relevant than Facebook to the younger demographic. Earlier in June, Taco Bell co-hosted an event with Zendaya at the company’s headquarters in Irvine, California, where she gave a motivational speech that was shared on Snapchat about balancing school and being a teen celeb.

“We figured it’s the best way to reach students and teens across the nation. Also the fact that, it’s more raw and real,” said Erika Johnson, who helps runs social media for Taco Bell as a community manager.

We're recognizing high school students' potential in a big way. Check out how on our @Snapchat.

While there’s nothing particularly raw or real about a corporation using a teen social media platform to encourage them to eat high-calorie, low-nutrition fast food, Taco Bell’s goal of helping young people realize their full academic potential seems at least in part genuine.

“With Graduate for Más it’s been such a great journey for us to help teens graduate, but really this #RecognizePotential campaign was put out there to create that overarching umbrella and share that value with people about what it is overall that we’re going after,” Robyn Brown, the marketing and development manager at Taco Bell, said. “[We want to] help people recognize their potential and in that journey we want you to graduate.”