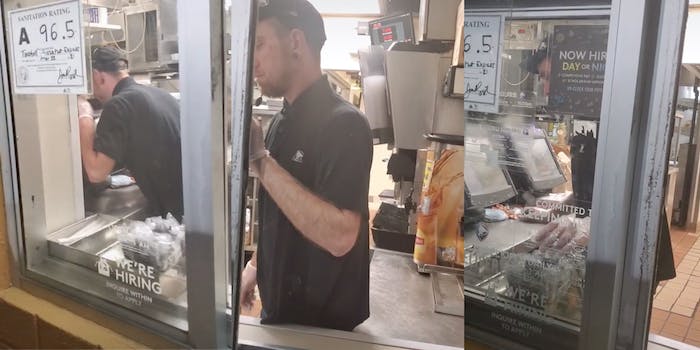 Some people are calling the TikToker 'cruel' for filming.

A viral TikTok video of a Taco Bell employee dozing on the job has viewers debating current working conditions and the federal minimum wage.

Posted to @jacobcohen8’s TikTok account, a brief video shows the inside of a Taco Bell through the drive-thru window. On the other side, a man can be seen leaning against the computer, seemingly dozing off. No one else can be seen in the store.

The person filming, presumably @jacobcohen8, loudly asks the man if the Taco Bell location is open, startling him back to awareness. Looking a bit dazed, the man confirms that they are open and begins taking @jacobcohen8’s order. The order is relatively simple, but some viewers took issue with it given that the employee appeared to be alone and exhausted.

The video quickly sparked a lively debate in the comments section. Not everyone suspected the employee was simply burnt out, prompting less empathetic comments from some. Some called out @jacobcohen8 for filming someone who is clearly struggling.

This led to a discussion about minimum wage jobs and how much work is required of people making far too little money. People called for the government to “get that man his 15 an hour.” A number of commenters noted that many American employees are working to hold down multiple jobs and pointed out how hard night shifts are on the body.

Regardless of his reasoning for being in rough shape, people rallied behind the employee and called @jacobcohen8 out for not only filming him, but also going through with his order when the man was clearly in no state to be working. @jacobcohen8 confirmed in a comment that he “never got the nacho fries… or the beef burrito.” Instead of simply driving away, however, he says he “waited 15 minutes to get to the order box, and I sat there for 16 min with him till pd arrived.”

Many viewers were upset by this detail, calling @jacobcohen8 out for phoning the police on the Taco Bell employee. They saw it as a callous move, considering the man’s clear struggle. Others noted that police intervention may have been the right move.

@jacobcohen8 posted another video, several hours after the first. It shows the same general scene, in the minutes leading up to when he made his order. People called him out for exploitation on this video as well, which @jacobcohen8 protested. He noted that he called the “non-emergency” line because he was “worried [the employee] was going to pass out.”

People were still distressed by the news that police had been called, however, noting that the employee almost certainly lost his job. They called on others to help people when they see them struggling, rather than film or call police.

No further updates have been posted by @jacobcohen8, but he claimed on the second video that he would upload the entire 16 minutes he filmed as he waited for police to arrive. The video has not yet been posted.

@jacobcohen8 could not be reached for comment by the Daily Dot; it is unclear which police department was called to the scene.