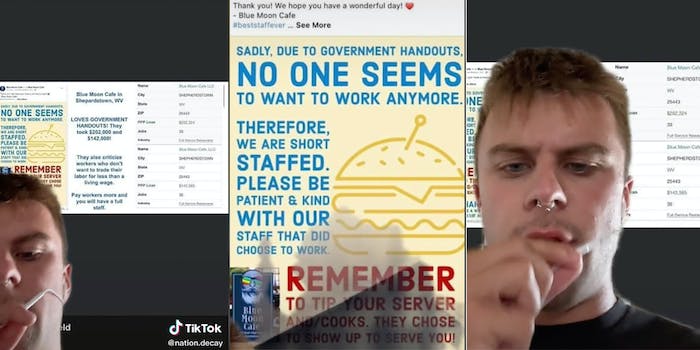 The manager of the restaurant asserts that the loans were used in accordance with federal guidelines.

A TikToker took to the platform to discuss a West Virginia restaurant that allegedly took PPP loans while trying to make staff work for just tips—in addition to mocking them for not wanting to work—before abruptly shutting its doors.

The TikTok comes from the nation.decay account, relaying details it pieced together about the Blue Moon Cafe in Shepherdstown, West Virginia. Since publishing, the video has generated more than 2.5 million views.

The video begins with the creator noting that the restaurant owner “decided to pull a little stunt” on its now-deleted Facebook page on July 16. The TikTok then shows a screenshot of a Facebook post, appearing to be from the Blue Moon Cafe account, that reads in part, “Sadly, due to government handouts, no one seems to want to work anymore. Therefore, we are short staffed. Please be patient and kind with our staff that did choose to work.”

However, the video then points out, “Turns out that after trashing the community for being on government assistance during the pandemic and not paying their employees through the pandemic, they went on ahead and collected $300,000 in government handouts.”

The creator added, “Kind of cute and quirky considering they weren’t paying employees in anything more than tips during the pandemic, while they were open and scheduling people.”

It then goes on to talk about how the restaurant closed its doors the following day, “We move on to Saturday morning, a busy Saturday morning and downtown, and suddenly they’re closed for emergency repairs. Turns out that the entire staff, walked out, refuse to work, and they were all fired, and they’re now lying about it and still trashing the community.”

Blue Moon owner Greg King, in an email response to the Daily Dot’s inquiry about the TikTok, sent a statement that had a different explanation for why the restaurant closed its doors.

“Some of our staff walked out,” King claimed, “partly because of a misunderstood social media post by us and partly because they were not happy with our latest management addition. Just before opening the door, a number of our employees threatened to walk out unless we fired our manager. I, as an owner, realized I could not open short-staffed. I became frustrated and angry and closed the restaurant. After that closing, a whirlwind spun out on Facebook and from other media groups on the Internet. Malicious and untrue posts were made.”

The nation.decay account also had a follow-up TikTok video, with just less than 90,000 views so far, alleging sexual harassment issues at the Blue Moon. “In 2020, multiple employees came out and said that the owner had been sending them, unsolicited dick pics,” the TikToker alleged in the video.

Erin Jacobs, the manager King referred to in the statement, told the Daily Dot, “Blue Moon applied for and was granted PPP loans. It was used to pay our employees. We follow all government guidelines. 60 percent must go to wages, the other can be used for rent, mortgage, electric, etc. It is a federal loan…not free money.”

Jacobs went on to note, “These were not ‘kids;’ they were 23 to 40-year-old adults. Mr. King did look at them as family. Gave them cars, a place to live if needed, financial support if need, sent and paid for rehab in several cases…and this is how ‘family’ treats Mr. King??”

Regarding the allegation about the unsolicited photos, Jacobs claimed that it came from a former employee, and alleges, “We have security video of that individual breaking into the restaurant and stealing from it.”

“Grand larceny is a serious charge,” she added. “He quit and fled the state.”

The Shepherdstown Chronicle, reporting on the matter, said that “after the standoff took place, the cafe’s owners fired the entire staff, including those who had remained. They then rehired the half uninvolved in the standoff and spent the next two weeks closed, as they trained replacement staff and repaired and cleaned the building.”

The article also said that the owner, reached by the reporter on July 22 (but misidentified as Greg Wise), “regretted his angry reaction in firing all of his staff following the standoff.”

The article also claimed Jacobs is King’s goddaughter, a detail she would not confirm with the Daily Dot, though she claimed that “90 percent [of that article] is false information and biased.”

The restaurant, promising a “diverse, delicious menu, offering craft beers in an eclectic setting” according to its website, is now operating with Thursday through Monday hours.