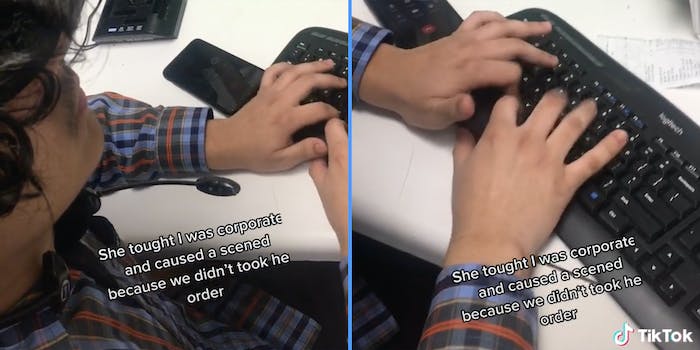 ‘We close at 4:00 am, and it was 4:03’: Customer refused service after Taco Bell closes, calls to complain in viral TikTok

The woman also asked to be compensated for her troubles.

A Taco Bell customer complaint has gone viral on TikTok after an employee recorded the late night rant. The original video has over 20,000 views and commenters can’t get over the woman’s remarks.

In the video, posted by @tacohoeleess, an employee speaks with a customer who couldn’t make the store’s 4 am closing time. The worker claims the woman tried to order three minutes after close.

According to the caption, she believes she’s speaking with corporate headquarters. The TikToker wrote in a comment that he had given her his number to complain, rather than the corporate customer service line.

“I know their turnover rates are high because I go in there every single night,” she says “It’s just the fact they didn’t even take my order at all. All they had was drinks.”

She continues, “And you guys lost out on business because… we probably would’ve bought like $20 worth of Taco Bell for two people, maybe even $30.”

The caller then says she’s on the way to another Taco Bell location but asks to be compensated for her troubles.

TikTok users could not get over the 4 am Taco Bell customer complaint.

@carolinascorona said, “Soon as 4am hits that headset power off”

@burrnda aded, “Man some people really do just have the AUDACITY!”

@damnisthatdan commented, “The fact that y’all close at 4 AM and she still couldn’t make it on time”

@luljaimegaming joked, “Damn what are they gonna do with that 20 dollar loss”