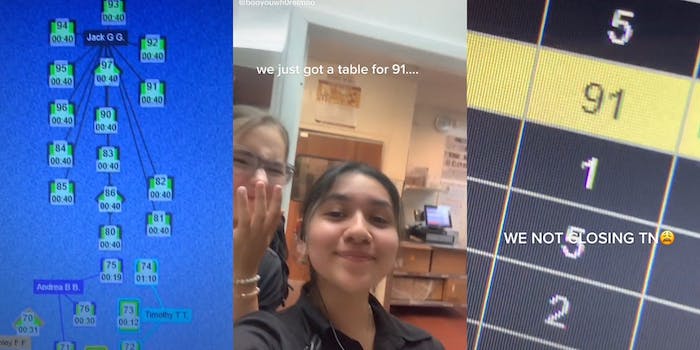 ‘I can’t believe this is allowed’: Restaurant servers get 91-person table, sparking debate

‘How do you even know that many people to eat with.'

A TikToker’s viral video showing a table for 91 people at a restaurant sparked debate among commenters, with some saying a party that large should not have been eating at a restaurant without making a reservation or having a caterer.

Posted by @booyouwh0relmao, an initial video shows the pantomimed reactions of herself and some co-workers to a table of that size.

@booyouwh0relmao clarified for her viewers in the comments section that the large party was the result of a sports tournament and that the restaurant she works at does not take reservations at all.

In a follow-up video, @booyouwh0relmao says the party started with 51 people, who came in around 6pm.

She says the party ended up occupying a little over two sections in the restaurant and that while she “did not know about the tip,” the workers were left some chocolate macadamia nuts.

@booyouwh0relmao’s video was viewed over 7.4 million times. Some commenters expressed that they felt a party that large should not have been attempting to go to a sit-down restaurant, without a reservation or arranging to cater.

“They should’ve just ordered catering at that point,” one commenter wrote.

“How were they not embarrassed?” another said. “Like how in anyones rational mind do you go to a restaurant with 91 people?”

“At this point reserve the restaurant bruh,” a third urged.

Many argued “this should not be allowed.” ‘Anything over 12 requires a manager approved reservation at my job,” one said.

Others shared their experiences with large parties of guests, although no one came close to 91-person party.

“The biggest table I had was around 30 people and they did not tip,” a commenter wrote. “91 is insane! I could not imagine.”

“I’m not even a server but I would have quit omg,” another commenter wrote. ” Had a party of 65 here yesterday.”

The Daily Dot has reached out to @booyouwh0relmao via TikTok comment.