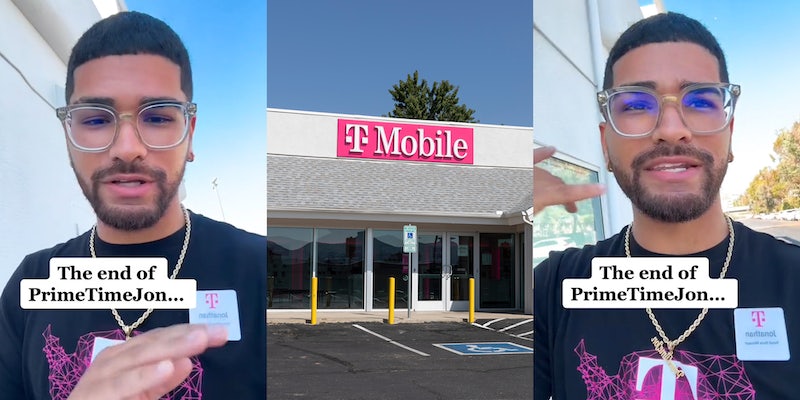 ‘This man has been advertising for y’all for free’: T-Mobile worker told to stop making TikToks—despite making them off the clock and promoting the company

'That’s all I wanted to do, was just cheer on T-Mobile.'

Social media monitoring by employers is a newfound, though startlingly common, phenomenon. According to a 2018 Gartner report, “of 239 large corporations, 50% were monitoring the content of employee emails and social media accounts, along with who they met with and how they utilized their workspaces,” per Harvard Business Review.

Sometimes, this monitoring can have consequences, with many users going viral after sharing their stories of being fired for using a social media platform.

Now, a user has gone viral after claiming that his company, T-Mobile, instructed him to stop making TikToks—even though he was doing it off the clock and in promotion of the brand.

Jon’s video explaining the situation currently has over 648,000 views.

In the video, Jon notes that he had received positive feedback from both other district managers and users on TikTok. While Jon notes that all of his videos were filmed off the clock, many prominently feature his T-Mobile store, more often than not in a positive light. The videos range from daily lifestyle vlogs to comedic sketches about customer interactions.

“Countless weekends, hours, and days. 12+ hour shifts, all the time. I’ve missed so many special occasions and different events and things like that for T-Mobile, showing my dedication,” he says of his commitment to his work.

Still, despite his obvious love for T-Mobile, Jon says that his store has several ongoing issues that were left out of his rosy T-Mobile coverage.

“I can’t even get, like, uniforms for work. They don’t provide me no shirts where I work at. My printers haven’t worked in forever; I can’t even print stuff out. Staffing sucks; [we’re] always working out by ourselves,” he shares.

Jon has not posted on TikTok since making this video, though he is keeping active on Instagram.

“@T-Mobile y’all need to make this right,” wrote one user. “This man has been advertising for y’all for free. Help this man out.”

However, some advised Jon that this was a lesson in employment.

“Once you realize these companies don’t care about you. You will live better!!” explained a commenter.

“I’m sorry bro, but the company could careless,” agreed another. “Dont ever sacrifice yourself for a company that will replace you.”

The Daily Dot reached out to both Jon and T-Mobile via email.