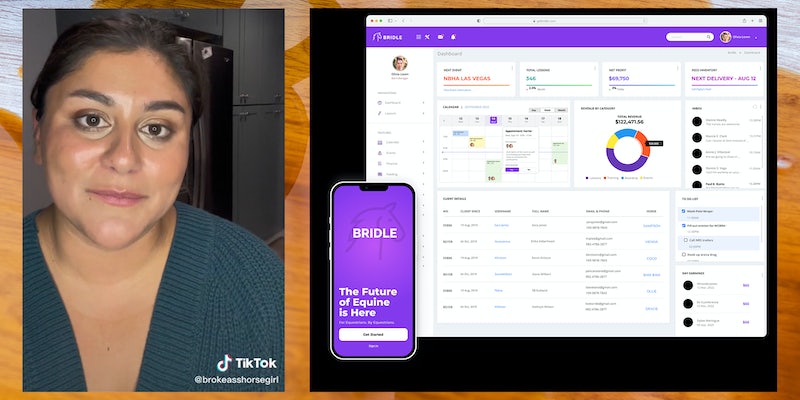 ‘Employers are honestly OFF THEIR ROCKER with social media policing’: Tech worker said she was fired after making TikTok during remote meeting at 4:30am (updated)

'There is no reason anyone should be in a meeting at 4:30am. They did you a favor.'

As Chelle (@brokeasshorsegirl) was settling into her morning meeting at 4:30am, she says she noticed she accidentally forgot to place a mug under her Keurig machine, spilling coffee “all over the place.”

While dealing with the issue, the popular TikToker says she filmed a brief TikTok showing the coffee machine issue and her reaction to it.

What she didn’t realize, however, was that a conference call was audible in the background, which later revealed to her company that she was filming that TikTok during a meeting.

As a result of this, she says she was fired. Her video recounting this experience currently has over 281,000 views.

“They were having a conversation that had absolutely nothing to do with me, so I went off-camera, took the 20-second video, and hit upload,” she recalls. “I did not think anything of it until the next day, when I got called into a meeting with HR and my chief product officer, and they said, ‘Hey, somebody sent us this video, and we are immediately dismissing you from the company for gross negligence.’”

@brokeasshorsegirl Yep. That happened. I got fired because of TikTok so now I’m starting a company and I’m going to take you along the way with me on TikTok. To the moon? #fired #siliconvalley #startup #horsegirl #storytime ♬ original sound – Chelle

Chelle says that, while she does not believe she should have been fired, she understands the complexity of the situation and is instead using the opportunity of losing her job as a reason to finally start her own business.

“Honestly, do I think that I should have been fired? I mean, nobody ever thinks they should be fired, but honestly, no,” she explains. “They weren’t really talking about anything super confidential, you could honestly barely hear them in the background, but alas, they found it to be a fireable offense, and so, they canned me, and I have nothing left to do except for ‘accept it.’”

Now, Chelle says she’s going to be using her newfound free time to launch a company she says she’s been looking for an excuse to launch for quite some time: an equine-focused company called Bridle.

“I am finally combining my two loves: technology and horses,” she details. “And I am going to build the first ever and number one tool for equine professionals to manage their businesses.”

In the comments section, users were initially shocked that Chelle had a meeting at 4:30 in the morning.

“There is no reason anyone should be in a meeting at 4:30am. they did you a favor,” wrote one user. “Congrats and I love this for you!”

“A 4:30am weekly standup meeting? Omg,” agreed another. In response, Chelle wrote that she was “online at 5am the rest of the week.”

Other users speculated the TikTok was simply an excuse and not the actual cause of the firing.

“I work in fintech And you should not have been fired. They were looking for some thing,” a commenter offered.

“My sentiments exactly,” Chelle wrote in response. She explored these thoughts more deeply in a later TikTok.

Under the comments of another follow-up video introducing her new company, users seemed excited, showing the on-the-ground need for the business being pitched by Chelle, who boasts nearly 130,000 followers.

“I currently have 55 horses. we do so many different programs. I have multiple apps to try to keep track of everything!! this sounds amazing,” a commenter exclaimed.

“Myself and a lot of my trainer friends have been searching for a tool as your describing for the longest time,” a second added.

Above all, users appreciated Chelle’s positive spirit and can-do attitude.

As one commenter said, “I love this generation. When a company fires us we just build our own.”

Update 2:32pm CT, Sept. 21: In an Instagram DM exchange with Daily Dot, Chelle offered further thoughts on her situation and the video’s virality.

“The response has been fantastic, and SO positive,” she wrote. “I knew airing out my dirty laundry about being fired was probably going to bring backlash, but I’m so happy that I did. It’s my truth, and was my mistake, so I’m fully owning it and using it as my redirection to what I truly want to do. I can only hope that I’m sharing my journey I’ll be able to inspire others to take ahold of the bad shit that happens to them and turn it into something good.”

As far as Bridle is concerned, the outlook is positive.

“We gained so much great traction and received so much interest from potential customers,” Chelle detailed. “These next few weeks will be spent speaking to potential users and getting our first cohort going on using the platform!”