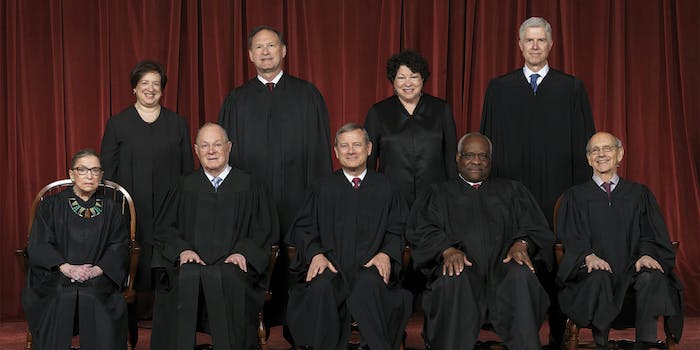 The fate of the Muslim ban lies with conservative justices

Well over a year after President Donald Trump first floated the idea of a travel ban, the United States Supreme Court finally heard opening arguments in Donald J. Trump, President of the United States v. Hawaii, the case that will clarify the scope of executive powers on immigration.

On Wednesday, according to CNN, Solicitor General Noel Francisco tried mightily to convince SCOTUS that “this is not a Muslim ban,” although every iteration has targeted majority Muslim countries. As the Washington Post reported, the administration’s argument seemed to resonate with the conservative members of the bench, with Chief Justice John G. Roberts, Jr. and Justice Anthony M. Kennedy suggesting that the president is authorized to make these kinds of national security decisions as he deems fit. Justices Ruth Bader Ginsburg and Sonia Sotomayor, meanwhile, suggested that Trump had overstepped his bounds.

“Where does the president get the authority to do more than Congress has already decided is adequate?” Sotomayor asked.

As mentioned, we’ve seen three versions of the travel ban proposed: The first came immediately after Trump’s inauguration, when he clogged up airport activity nationwide by signing a 90-day moratorium on emigration from Iraq, Syria, Iran, Libya, Somalia, Sudan, and Yemen to the U.S. (Syrian refugees were suspended indefinitely.) That smacked of religious profiling—especially in light of his campaign call for a “total and complete shutdown of Muslims entering the United States”—and sparked widespread protest.

Immediately, federal judges at the state level stepped in to block parts of the ban. All the while, Trump insisted that he wasn’t targeting a specific faith, but rather, regions he identified as threatening (whose populations just so happened to be mostly Muslim). He then eased restrictions on green card holders in early February, but a federal judge blocked the ban nationwide nonetheless.

Despite the government’s appeals, judges continued to uphold the injunction: Then came a new executive order in early March, which removed Iraq from the blacklist along with the indefinite ban on Syrian refugees. The state of Hawaii filed its lawsuit the next day, and a federal judge went ahead and blocked the travel ban again, instituting a national restraining order.

Then, in September, Trump tried a third time, signing an executive order that barred entry from Chad, North Korea, Venezuela, Iran, Libya, Syria, Yemen, and Somalia, scaling refugee resettlement back from Obama’s projected 110,000 to 45,000 applicants. (Chad has since been removed.) In October, a judge in Hawaii blocked this version, too, and it is from that decision that we now arrive where we are today: Trump v. Hawaii.  In June, SCOTUS decided to take up the ban, and now, they consider both the bounds of the president’s authority on immigration, and the extent of constitutional protections for religious freedom.

The Constitution does, as the New York Times reports, leave immigration matters up to the president’s discretion: “Whenever the president finds that the entry of any aliens or of any class of aliens into the United States would be detrimental to the interests of the United States, he may by proclamation, and for such period as he shall deem necessary, suspend the entry of all aliens or any class of aliens as immigrants or nonimmigrants, or impose on the entry of aliens any restrictions he may deem to be appropriate.”

However, there’s also that pesky little part about religious liberty to consider: Per the First Amendment, the United States is supposed to function on the premise that no one can be persecuted or discriminated against because of their faith. Trump, of course, has said that the ban isn’t religiously motivated; he has also stated his preference for Christian refugees, and again, promised to go after a particular religion—not particular regions—if elected president.

Former Acting Solicitor General Neal Katyal represents the challengers, the state of Hawaii, and argues that the ban amounts to an unprecedented “sweeping and unilateral order that purports to ban over 150 million aliens—the vast majority of them Muslim—from entering the United States,” according to CNN.

“If the president possessed the power he claims, he could eradicate Congress’ immigration laws with the stroke of a pen, and usurp virtually the whole of the immigration power that the founders vested in Congress to secure [religious] liberty,” Katyal said Wednesday, according to CNN.

Yet certain justices seem unconvinced. Justice Samuel Alito suggested Trump was “squarely” within his constitutional powers in banning “any aliens” he saw fit to ban, the Washington Post reported, while Justice Roberts wondered whether or not we’d balk at the president barring all entry from Syria if he had it on good authority that 20 Syrians intended to smuggle biological weapons into the country. Katyal conceded that, in such a specific instance, the ends would justify the means, but Justice Elena Kagan lobbed a similar hypothetical at Francisco. What would we make of a president who’d repeatedly demonstrated anti-Semitic sensibilities and then set about banning Israeli immigrants as his first order of business?

At the end of his arguments, Francisco demonstrated the president’s (and his own) lack of knowledge of Islam, saying that Trump believes the religion is one of “the great countries of the world.” Yes, Trump has so much love for Islam, he thinks it’s a country.

That’s all you need to know. #NoMuslimBanEver

Kagan acknowledged that the president in her scenario was an “out-of-the-box kind of president,” whose hypothetical trajectory mirrors the one our president took in instituting his own travel ban. One could argue that Trump “determined” these countries posed a risk long before he took office, and solely on the grounds of his own personal bias. (Maybe also the popular bias he calculated could win him an election.)

Still, SCOTUS must also consider the states’ latitude to push back against federal orders, and whether or not the states had the authority to halt a national ban at all. According to the analysis of SCOTUS court reporter Amy Howe, things seem to be swinging in Trump’s favor.

“After over an hour of debate, a majority of the court (and perhaps even a solid one) appeared ready to rule for the government and uphold the order in response to concerns about second-guessing the president on national-security issues,” Howe wrote on the SCOTUS blog. “Although it’s always risky to make predictions based on the oral argument, it’s difficult to see how Hawaii can pick up the five votes that it needs to strike down the president’s order.”

Oral arguments probably won’t start until June, so we still have a ways to go before anything about the ban’s status becomes certain. Like everything else in this administration, it’s a grave game of wait and see.