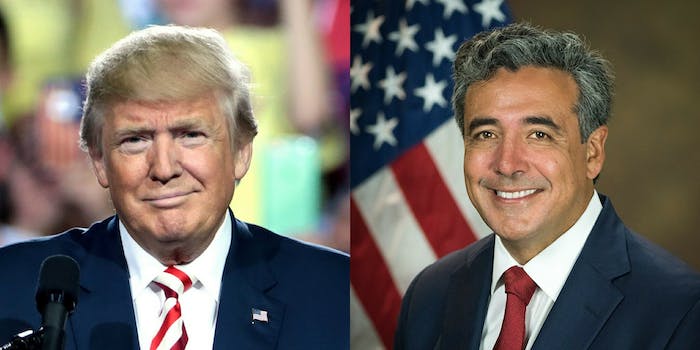 Trump thinks Islam is ‘one of the great countries,’ his attorney tells SCOTUS

President Donald Trump believes that Muslims in the U.S. are great Americans who love the country and that Islam is “one of the great countries of the world,” according to Department of Justice Solicitor General Noel Francisco.

Francisco made such comments while delivering his opening arguments on the legality of President Trump’s travel ban against the nationals of seven Muslim-majority countries for the Supreme Court case Trump v. Hawaii.

Islam is not a country, but a religion, the followers of which are called Muslims. Many of the nationals targeted within the administration’s travel ban are practicing Muslims. The fictional great country of Islam is not to be confused with the “Nation of Islam,” which is also not a country, but an African American political and religious movement launched in the 1930s.

Francisco’s remark was part of a broader plea to convince the justices that Trump is not targeting Muslims in his travel ban, evidenced by Trump’s respect for American Muslims (and the nonexistent country of Islam).

“He made it crystal clear on September 25 that he had no intention of imposing the Muslim ban,” Francisco said. “He has made crystal clear that Muslims in this country are great Americans, and there are many, many Muslims countries who love this country, and he has praised Islam as one of the great countries of the world.”

Solicitor General Noel Francisco closed today's SCOTUS case on the #MuslimBan case by arguing that Trump "has praised Islam as one of the great countries of the world."

HELP this is actually real pic.twitter.com/w9QMWTpzpI

Excellent lawyering on both sides of travel ban, but both Neal Katyal and Noel Francisco had awkward endings. Just as Katyal delivered his final flourish, the chief told him to take five more minutes; Francisco referred to Islam as a "country" in his final line at the lectern.

Despite Francisco’s confident flub, an argument analysis from Supreme Court reporter Amy Howe asserted that the travel ban seems likely to be found constitutional by the Supreme Court.

“After over an hour of debate, a majority of the court (and perhaps even a solid one) appeared ready to rule for the government and uphold the order in response to concerns about second-guessing the president on national-security issues,” Howe wrote. “Although it’s always risky to make predictions based on the oral argument, it’s difficult to see how Hawaii can pick up the five votes that it needs to strike down the president’s order.”

Francisco’s false assertion of the religion’s sovereignty had anti-travel ban advocates questioning the capabilities of the solicitor general, and more broadly, the Trump administration’s capability to issue such a ban.

That’s all you need to know. #NoMuslimBanEver

What is Islam the country, how does one go there, and most importantly is the food good

On Twitter, the hashtag #IslamIsAGreatCountry expanded upon this fictional country and sung the nation’s praises.

I can see that #IslamIsAGreatCountry from my house.

Though #IslamIsAGreatCountry I like to summer in Tao Ville

#IslamIsAGreatCountry I hear they have the best food

Francisco notably misspoke in the Supreme Court in 2016, when he referred to Justice Ruth Bader Ginsburg as “Justice O’Connor,” referring to Justice Sandra Day O’Connor, who had retired in 2006.

Listen to the audio of Francisco’s remarks below, at the 1:06:35 mark.