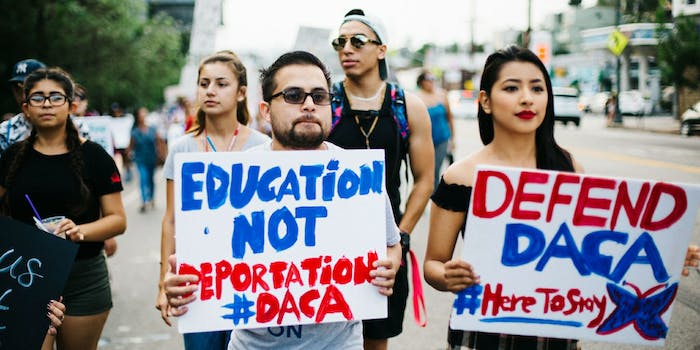 In an effort to put an end to the Deferred Action for Childhood Arrivals (DACA) program, the Justice Department has filed a petition for the U.S. Supreme Court to directly review an injunction requiring the Department of Homeland Security (DHS) to restart the program.

According to ABC News, the Justice Department asked the court to review the program and ruling Thursday night.

In September, the Trump administration announced the end of the DACA program, which allowed undocumented immigrants who arrived as children to legally work in the U.S. The DOJ then gave DACA recipients through March 5 to re-apply for another two years. At the time, more than 689,000 people were enrolled in DACA, and 12,710 have lost their status since.

On Jan. 9, Federal District Court Judge William Alsup called the manner in which DACA was ended “arbitrary and capricious,” and ordered DHS to restart the program and allow previously-enrolled recipients to re-apply. As a result, United States Citizenship and Immigration Services has announced that “until further notice,” DACA is back in place.

That same day, President Donald Trump met with lawmakers to discuss the creation of a clean DREAM Act that would allow DACA recipients and undocumented immigrants, also known as Dreamers, a path to citizenship without the attachment of Trump’s border wall funding or the end to the U.S. visa lottery program. Trump and lawmakers have yet to reach an agreement on clean immigration reform.

In response to the national injunction on DACA, the Justice Department appealed to the 9th Circuit Court of Appeals, a process required in order to seek direct review from the Supreme Court. The Supreme Court, however, doesn’t typically grant cases without a completed appeals process.

“The district court has entered a nationwide injunction that requires DHS to keep in place a policy of non-enforcement that no one contends is required by federal law and that DHS has determined is, in fact, unlawful and should be discontinued,” the Justice Department petition states.