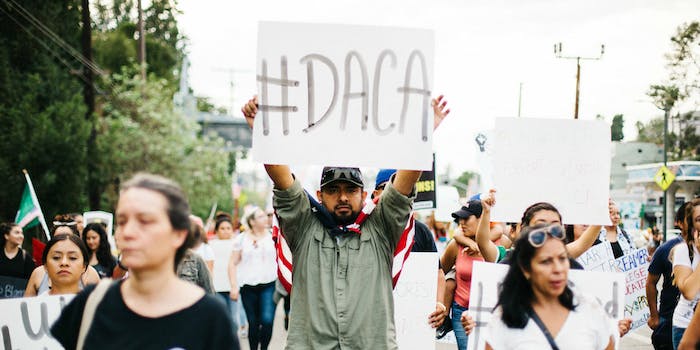 Dreamers allowed to apply for renewal of DACA protections

Dreamers can rest a little easier—at least for now.

The United States Citizenship and Immigration Services (USCIS) said in a statement late Saturday that “until further notice,” the Deferred Action for Childhood Arrivals (DACA) policy “will be operated on the terms in place before it was rescinded on Sept. 5, 2017,” by President Trump.

That means that the undocumented immigrants who were previously granted deferred action under the Obama-era program will be able to request a renewal if they filed on or after Sept. 5, 2016—or file for a new request if their DACA expired or was terminated before then. The policy decision only affects those who previously received DACA.

The move comes in response to a nationwide injunction issued on Tuesday that ordered the Trump administration to resume the program. In his ruling, Judge William Alsup of Federal District Court in San Francisco countered the Trump administration’s claim the DACA was unconstitutional, noting secretary of the Department of Homeland Security’s long-standing authority to grant temporary protections, which is DACA’s primary function. He also used Trump’s own tweets against him to illustrate the wide public support for Dreamers, the catchall term for those who receive DACA benefits.

Does anybody really want to throw out good, educated and accomplished young people who have jobs, some serving in the military? Really!…..

The fate of DACA—and the estimated 800,000 immigrants who could face deportation without it—has been at the center of fierce public debate in Washington, particularly as budget talks ramp up. On Tuesday, Trump met with lawmakers on Tuesday to begin preliminary negotiations, and some worry that the injunction, as the New York Times reported Tuesday, could alleviate pressure on both Republicans and Democrats to develop a longer-term solution for Dreamers and other undocumented immigrants in Congress.

Indeed, President Trump tweeted early Sunday, “DACA is probably dead because the Democrats don’t really want it, they just want to talk and take desperately needed money away from our Military.”

DACA is probably dead because the Democrats don’t really want it, they just want to talk and take desperately needed money away from our Military.