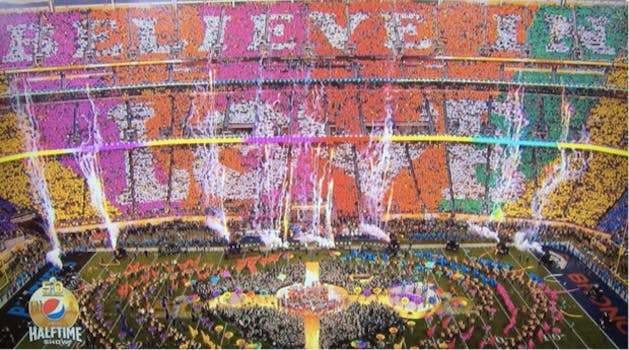 According to some of Twitter‘s more conservative users, last night’s Super Bowl halftime show was not just a star-studded performance with the world’s biggest pop stars but was also full of gay propaganda.

As Beyoncé, Coldplay, and Bruno Mars belted out “Uptown Funk” in the middle of Levi’s Stadium, some viewers saw “a clear homosexuality message” being promoted.

Fucking Super Bowl encouraging homosexuality now are you kidding me..

Just sayin, all across the scriptures, nations were destroyed when they started homosexuality. And that super bowl half time got me worried

Apparently, they felt the gay-ing of the Bowl was due to some rainbow-colored lights and props in the crowd during the performance.

The rainbows in the stand spelled out “I believe in love” as well.

What the homosexual propaganda conspiracy theorists seemed to miss, however, was the fact that Coldplay‘s new album, A Head Full of Dreams, is decorated with rainbow-colored kaleidoscopic cover art that is distinctly similar to the lighting scheme at the Super Bowl halftime show that the band headlined.

Others pointed out that the band’s recent video “Hymn for a Weekend” is set in India during the Holi festival of colors, which often results in a rainbow-splattered effect.

It’s possible that, as Mic’s Tom Barnes pointed out, maybe the band was promoting a pro-LGBT message. And maybe Beyonce’s Black Panther-garbed backup dancers during her performance of “Formation” were intended as a nod to the Black Lives Matter movement. It could be that conservative Twitter was right on the money. Either way, there will be a thousand thinkpieces about it this week trying to figure it out.