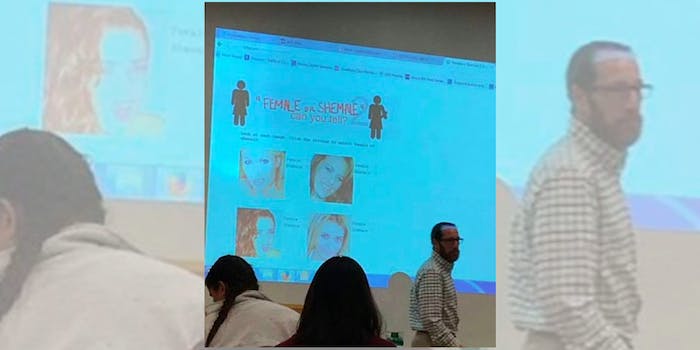 He also allegedly cautioned students not to take 'the wrong one' home from the bar.

A sociology professor is under scrutiny for asking students to play an insensitive game called “female or shemale,” which encourages students to make misogynistic and transphobic comments about transgender women.

State Universtiy New York (SUNY) Geneseo professor David Sorbello’s lecture went viral over the weekend after student Jasmine Cui posted a tweet showing Sorbello in a lecture displaying a web page that read, “‘FEMALE or SHEMALE,’ can you tell?” for his class. Sorbello appears to have gotten the quiz from British website B3ta, which previously asked users look at pictures and choose whether a woman in a given photo is cisgender or transgender.

The quiz encourages cisgender participants to scrutinize trans women for stereotypical signs of gender transitioning. According to sophomore Jillian Sternberg, who spoke out about the class to BuzzFeed News, students were upset with Sorbello’s lesson. The professor allegedly intended to use the quiz to teach “sexual dimorphism,” but his lecture largely fixated around jokes making fun of transgender women.

“He said something along the lines of, ‘Be careful not to get too drunk or you’ll take the wrong one home,'” she told BuzzFeed News. “He would comment on some of the pictures like, ‘I’m definitely not going to the bar with you.'”

After being approached by Sternberg and another student, Sorbello was allegedly “very mad” that students did not like the quiz. Cui later turned to Twitter with an update, reporting that after the confrontation, Sorbello banned electronics from the class and said slides “will no longer be made available for taking pictures after class.”

“Update: after students confronted Sorbello, he sent out an email banning the use of electronics in class,” Cui tweeted. “HE KNOWS HE’S IN THE WRONG.”

Cui, who is also a member of the school’s diversity committee, told the Daily Dot she’s pushing for “institutional reform” and “mandatory sensitivity training” for SUNY Genoese’s faculty. She claims Sorbello has previously targeted students with offensive comments in the classroom, telling one student she “wasn’t the only one dropped when she was a child” when he learned of the student’s sisters’ educational background.

“According to a number of students, Sorbello has voiced his discomfort teaching certain topics before — this topic included,” she told the Daily Dot. “Of course, no professor should be teaching material they’re uncomfortable with; however, students should not have to shoulder the burden of intellectual labor. We are not here to educate our educators. The sociology department should make sure their instructors are comfortable with the curriculum.”

Others on Twitter agree, criticizing Sorbello’s quiz as perpetuating violence against trans women.

Look at that drawing! This is UNCALLED FOR. We are exposing monsters just by being alive, demanding our rights, and not going away.

@Lavernecox why isn’t anyone talking about this!? It’s bigotry and hateful. More people should see this.

Totally can't justify this one with context. It's clearly wrong on all levels. This professor is contributing to transphobia.

People literally murder people because of this narrative.

Some are reiterating Cui’s point, arguing that Sorbello has a long history of cracking jokes that target women and people of color.

He used to teach @SyracuseU & did the same thing many times. He's terrible & should have been fired long ago for his racism & homophobia.

But more than anything, people inside and outside the SUNY Geneseo community want Sorbello fired. Since the quiz went viral, over 200 people have signed a petition demanding the university remove the professor.

Either this man lacks an understanding of basic human decency or he is a grown man so hungry for the validation of teens that he is willing to set it aside for what he thought would be a laugh. Either way he does not deserve the title of teacher.

Brb, sending an email to the @SUNYGeneseo Alumni Association on what they can expect to happen to donations bc of this.

This is wrong. This is not what @SUNYGeneseo stands for. This is worse than just being insensitive. It's hurtful & cruel.

Geneseo Alumni: Please share this & join me in demanding that Intro to Sociology Professor David Sorbello be removed from the SUNY Geneseo faculty & staff. https://t.co/qafryXMuFH

The Daily Dot reached out to Sorbello, SUNY Geneseo’s sociology department, and the school’s interim chief diversity officer, and the school replied with an official statement from President Denise A. Battles on the incident. On Friday, she announced the school is looking into the situation to “determine if and what action is warranted.”

“The classroom is an environment in which students and faculty can and should discuss challenging topics and ideas, which makes it all the more important that we gather and fully review the facts in this case,” Battles said.

“As we review this situation, let me say unequivocally that SUNY Geneseo has a steadfast and uncompromising commitment to diversity and inclusivity,” she continued. “We work diligently to sustain an inviting and supportive environment for people of all gender identities, gender expressions, sexual orientations, races, religions and other identities.”