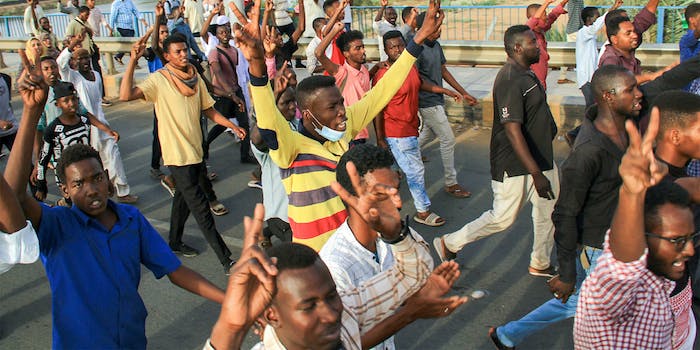 Social media is helping raise awareness about massacres in Sudan

Sudan is in the middle of a revolution, and a social media campaign is playing a part.

The African country of Sudan is in the middle of a revolution, and social media is playing a part in raising awareness and calling for change.

Under the rule of former President Omar al-Bashir, Sudanese civilians couldn’t afford bread to eat. The severe economic decline and civil unrest led to protests starting in December 2018. After months of civilians occupying the streets, al-Bashir was forced out of power in April 2019 by the Sudanese military. While this was cause for celebration among protestors, their cause didn’t cease—they are continuing to call for a civilian government and the overhaul of military rule.

On June 3, violence broke out as Sudanese paramilitary forces attacked a protest camp in the country’s capital, Khartoum. At least 108 people were killed, and 40 bodies were pulled from the Nile River, according to the Washington Post. Civilians reported rapes and robberies perpetrated by the paramilitary forces, and internet and cell service were shut off, leading to a media blackout, according to the New York Times.

As a result of the media blackout, people are using the hashtags #SudanMassacre and #IAmSudanRevolution on Twitter and Instagram. People are also changing their avatars to a shade of blue to show solidarity.

Some are also sharing personal stories about slain Sudanese civilians. Instagram user @hadyouatsalaam, whose name is Shahd, shared that one of her friends was killed, and another was abducted and beaten. (Shahd did not immediately respond to the Daily Dot’s request for comment.)

It’s really hard being an influencer and sharing information that is “off brand” and not worthy of the “feed” but I cannot hold this in anymore. I am at my office crying because I have so many emotions in me and I feel horrible. There’s a massacre happening in my country Sudan’s and a media blackout and internet censorship for four consecutive days. There is no objective media sharing what’s going on expect for @aljazeeraenglish which had their offices shot down. My friend @mattar77 was MURDERED by the Rapid Support Forces. My best friend was in hiding on June 2 and that’s the last time I spoke to him. He was missing for 4 days and when I got in touch with him he said: “I was caught, beaten and abused and humiliated and arrested and had my phone confiscated from me. I am injured currently.” And all I could do this post this. I am sorry to all companies I am running campaigns with but my editorial calendar is currently on pause. I am willing to refund all and everything right away. Please, just send me an email. To my followers/supporters who this is too much for I am also sorry but my regularly scheduled content/reviews is also on pause. If this offends you, I am sorry. But I need to speak out and share this in a time like this. If you want to support me please share this information as widely as possible and don’t be silent. Be an ally because we need your help. And tune into my stories for more information. THE INTERNATIONAL COMMUNITY HAS BEEN SILENT. #sudanuprising #sudanese_protest #مجزرة_القيادة_العامة #عيد_شهيد #اعتصام_رويال_كير #اعتصام_القيادة_العامه #السودان @wawa_waffles @sudanuprising.updates #sudanrevolts #sudanuprising #iamsudan #iamsudanrevolution #sudanese #freesudan

Another post that’s been shared dozens of times calls for people to give Sudan the same level of attention that the Notre Dame Cathedral got when it was partially burned down in April. The cathedral received somewhere between $835 million and $1 billion in donations as wealthy French families rushed to aid rebuilding efforts.

“The media is not covering this in the slightest, a mass genocide of innocents is happening, a modern day repeat of events like the Holocaust, and the media has stayed silent,” Mengera said in an interview with the Daily Dot. “Pockets have opened for a building on fire, but eyes close and cameras shut off for humans burning.”

Mangera said every post people make or profile picture they change in solidarity helps raise awareness for the crisis.

“Many may say that changing an avi to blue has no impact, but in cases like these, its all about the attention,” Mangera said. “If many people have built up a strong, huge platform of awareness which those in power can’t ignore, they will hopefully use that for a change, starting off with getting Sudan out of the internet blackout so videos, pictures, [and] tweets from those in Sudan can reach the world and show the atrocities occurring.”

As a Muslim herself, Mangera said raising awareness is part of her duty.

“I feel deeply and passionately about this because these are my fellow brothers and sisters being massacred mercilessly and having their humanity stripped away,” she said. “It is my duty as a Muslim and a human being to spread awareness in hopes for justice for the minorities and humans in general as no innocent human deserves to be treated like this.”

To help provide food, medical care, and water to the people of Sudan, you can donate to a Facebook fundraiser set up by the University of Khartoum, or to a GoFundMe campaign set up by a U.K.-based Sudanese committee. You can also sign a petition demanding the United Nations investigate the June 3 military attacks. For other ideas on how to help, check out this list.