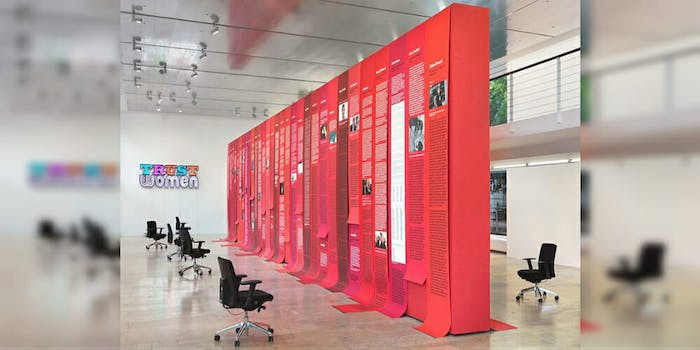 This is the opposite of empowerment.

An art exhibition documenting 200 cases of men exposed by the #MeToo movement has come under heavy criticism after a woman discovered images of her beaten face and body were displayed without her knowledge.

Andrea Bowers’ “Open Secrets 1 & 2″ seeks to document the #MeToo movement with the names and job titles of the men exposed, as well as what they were accused of and their responses. The exhibition is currently hosted at the Andrew Kreps Gallery in New York.

A post promoting the show explains, “This project serves as both a physical manifestation of patriarchy and a monument to the courage of survivors who are speaking out against sexual harassment and assault, thereby making public what many repeatedly said were ‘open secrets.’”

On the surface, this seems like it would be an important and moving art exhibition, showing the scale of patriarchal violence and the pushback against it. However, the execution has created a ripple effect of shock and betrayal. The section for Michael Hafford, a former writer and editor for sites like Vice and Playboy, has images of Helen Donahue, a writer who publicly accused Hafford, with bruises from when she says he assaulted her. Donahue didn’t give consent for them to use her pictures—in fact, she didn’t know they were being used at all.z

Donahue called out Bowers for using her image for profit, tweeting “DO YOU KNOW HOW FUCKING INSANE IT IS TO FIND OUT MY BEAT UP FACE AND BODY ARE ON DISPLAY AS ART RN FOR RICH PPL TO GAWK AT THRU A STRANGER’S INSTAGRAM STORY.”

here’s the art basel curator who loves the $300,000 exhibition with my beat up face in it so much: @GianniJetzer

same name on instagram & his email is [email protected]

PLS contact him on my behalf & share this, i don’t consent to being a part of this & want to be removed

People have been contacting Art Basel, which helped create the exhibition, demanding answers. Many say that Donahue and any other women who are featured should be compensated for having their trauma put on display without their consent. Others have pointed out that Bowers seems unaware of the hypocrisy of her Twitter avatar, which shows her holding up a sign that says “Who profits?”

Not art. (This is repulsive behavior and the creator/Art Basel should be ashamed of themselves.)

If someone was to go down there and tear it off the wall that would be some serious artistic expression.

On the Instagram post from the Andrew Klep Gallery promoting “Open Secrets,” the comments have been flooded with people calling it exploitative, disgraceful, and faux activism. In response to one of these comments, the gallery claimed only pictures of the accused were used.

this gallery is straight up lying to people in real time about using my image in their exploitative bullshit pic.twitter.com/ORnhU5zCge

The Daily Dot reached out to the Andrew Klep Gallery, which provided the following response from Bowers: “I, Andrea Bowers would like to apologize to the survivor whose image was included in my piece. I should have asked for her consent. She has asked that the panel including her photo be removed and I have honored the request. I have reached out privately and am very much looking forward to listening.”

A representative for the Andrew Klep Gallery also provided a statement, saying, “The galleries, Andrew Kreps, Kaufmann Repetto, Vielmetter Los Angeles and Capitain Petzel would also like to issue an apology to the survivor pictured in the piece. The galleries stand by Andrea Bowers and her work and support the conversation that has only just begun.”

The Daily Dot has also reached out to Art Basel and Helen Donahue for comment.