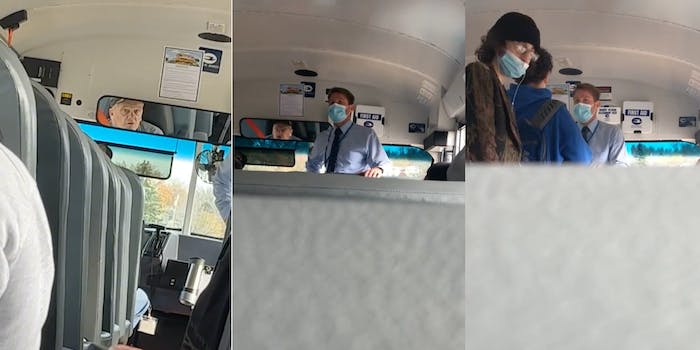 ‘I hope their parents sue like hell’: Bus driver allegedly slams brakes to punish students, leaving them with concussions and more

The students banded together to collect videos about what went down.

Students from a Pennsylvania high school banded together with a series of viral TikToks to document how their bus driver allegedly physically injured and verbally berated them.

The Greater LaTrobe Senior High School students who were on the bus took videos of the situation, and seemingly created a joint account on TikTok called @unanimousaccount3 to collectively expose what went down. The account currently features four videos with different snippets of the situation.

Together the TikToks have more than 675,000 views on the video-sharing platform. The students claim in the videos that the bus driver slammed on the breaks of a bus, resulting in students having “concussions, bloody noses, hurt necks and backs, and headaches.”

“He slammed on the breaks, all of our necks got injured and she has a bloody nose. That’s how hard [he slammed],” one student calmly said to what seems to be a school staff member or administrator that got on the bus to mediate.

The bus driver seems to be upset at an unknown student, but it’s unclear what went down before the students began recording.

The student stood her ground and insisted she “didn’t do anything.” The driver responded that he “doesn’t care” because she knows who did it. What “it” is remains unclear.

The bus driver told the student that she “better rat them out” or they’re gonna sit on the bus all day, but she said she “ain’t a snitch.”

One of the students recording said on two occasions that “nobody really did anything” and “nobody said anything to him.”

A student points out that he already slammed the brakes twice, hurting the students.

In one of the videos, a student can be heard in the background telling the agitated driver that he needs to “calm down.”

“You’re the worst kids I ever picked up,” the bus driver yelled.

A student asked him not to talk to them like that and he responded: “No, don’t you talk to me like that.” The driver screamed back that if the group of students wanted respect they had to earn it.

The staff member or administrator on the bus asked the students to sit down, but several chimed in to say that their actual bus was right behind them and they’d rather go on that one.

It seems nearly everyone was in agreement with the idea as kids are seen picking up their backpacks and shuffling into line to exit.

As the students leave the school staff member or administrator asks, “Who had the bloody nose?”

People in the comments section were alarmed by the driver’s behavior and commended the students’ handling of the situation.

“Kids on the bus can be loud, and sometimes bad asf. That gives him NO RIGHT AT ALL TO DO THAT. I hope their parents sue like hell. Poor kids,” one commenter wrote.

“Good for those kids for advocating for themselves!!! They’re damn right in saying they don’t feel safe with an aggressive bus driver,” @bbsarey said.

“That dudes got serious anger issue,” another user replied.

The Daily Dot reached out to the students via TikTok comment and to the administrators of the Greater LaTrobe Senior High School via email. Neither were immediately available for comment.