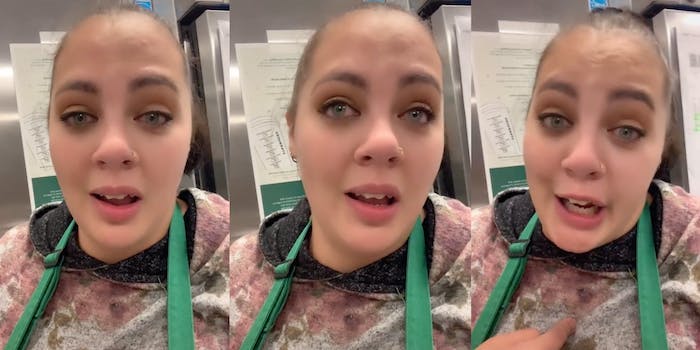 ‘I can’t do this’: Stressed Starbucks worker cries in viral TikTok, says she was fired shortly after

Working in the service industry is often a thankless job. Any gained experience is oftentimes paired with difficult co-workers, abusive customers, as well as fast-paced and demanding work.

Such is certainly the case for TikToker @0utspoken, who simply goes by Sarah on the platform. It’s been nearly a month since she shared a raw and emotional video of herself on the job at Starbucks in early June, but she says she’s still feeling the repercussions of that video.

Sarah’s tearful TikTok was originally shared on June 11. In it, she protests the fact that she—a nearly brand-new employee—was placed on the busiest shift of the day, despite not knowing what she’s doing. A broken drive-thru and short-staffed shift already make for a difficult day at work. Combine those with “shit” training, and Sarah found herself on the verge of quitting only three weeks into the gig at Starbucks.

Tearfully complaining that “I’m a fucking failure; I hate this job,” Sarah notes that she is “ready to fucking quit already.”

Filming from what appears to be the cold storage area, Sarah says that her anxiety is “taking over.”

Sarah’s TikTok blew up immediately after it hit the platform. She gained thousands of views within a few days, and the video is now sitting pretty with more than 806,000 views and 95,400 likes. It is by far the most popular video on her page, and it comes with an unfortunate recent update.

Sarah notes, in a followup video, that her Starbucks gig was her first fast-food job in nearly a decade. Thankfully, after the fact, her manager realized how much she was struggling and sat Sarah down to talk it through. Sarah says she got an apology for receiving inadequate training, and she left her shift feeling far better about the future. She optimistically concludes the TikTok with a note that “it’s time to go forward, and that support helped.”

Unfortunately, things apparently didn’t stay sunny for long. In several comments on the original TikTok, Sarah explained that in the weeks following her viral video, one of her co-workers “tattled” on her, forcing her to temporarily take the video down. She said that while things “smoothed out” for a while after the video was posted, things ultimately came crashing down.

Two weeks after “standing up” to a co-worker who was allegedly “harassing and bullying” her, Sarah says she was fired from her position at Starbucks on July 4. In the time she was employed by the company, she says the “mornings were ALWAYS short staffed and the morning were ALWAYS crazy busy.”

Several former Starbucks employees even took to the comments to allege that “that’s Starbucks for you.” “Its a horrible place to work,” one claimed.

Other commenters saw Sarah’s experience as yet another example of why workers in similar jobs are currently quitting in droves. If things continue on their current trajectory, we’re likely to see a lot more videos like Sarah’s end in someone walking off the job, rather than being fired.

The Daily Dot reached out to Starbucks, and Sarah could not be reached for comment.