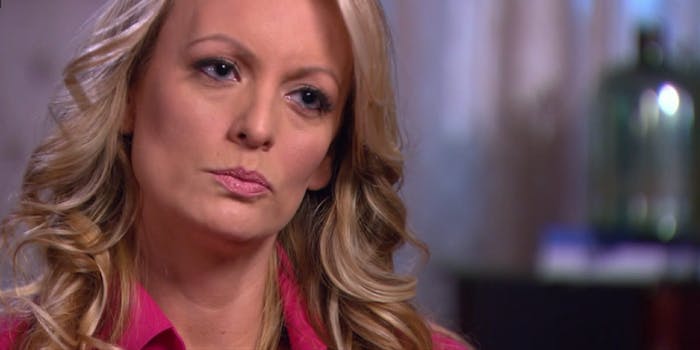 Daniels' appearance on '60 Minutes' was a way of pushing back.

Stormy Daniels does not want you to feel sorry for her. Amid ongoing sexual harassment and assault allegations levied against the president, she stressed that her supposed relationship with Donald Trump was consensual. In fact, she went so far as to distance herself from #MeToo during an interview on 60 Minutes.

“This is not a ‘Me Too.’ I was not a victim,” Daniels told Anderson Cooper. “I’ve never said I was a victim. I think trying to use me to—to further someone else’s agenda, does horrible damage to people who are true victims.”

Daniels may not be a victim when it comes to what happened sexually between herself and president, but there’s another, equally sinister way she’s allegedly being coerced. Daniels told Cooper that as soon as the president learned she was going to In Touch to share their alleged relationship, the story was shut down. It was also then that Daniels said she was approached by a stranger, while with her young daughter, who threatened her into silence.

“A guy walked up on me and said to me, ‘Leave Trump alone. Forget the story,'” Daniels explained. “And then he leaned around and looked at my daughter and said, ‘That’s a beautiful little girl. It’d be a shame if something happened to her mom.’ And then he was gone.”

Immediately after, Daniels said she was “rattled.” Yet, she didn’t feel like she could go to the police for protection. She was too afraid. That’s one of the reasons, Daniels stressed, why she agreed to a non-disclosure agreement in exchange for $130,000 in “hush money.”

“The story was coming out again,” Daniels warned on 60 Minutes. “I was concerned for my family and their safety.”

If Daniels’ story sounds familiar, that’s in part because it mirrors many other women’s experiences with being silenced and manipulated by men. #GrabYourWallet co-founder Shannon Coulter made the point earlier on Twitter, criticizing FiveThirtyEight’s Nate Silver for claiming interest in the Daniels story stems solely from “sex” and “gossip.”

“Many women including myself are interested in the Stormy Daniels story primarily b/c of the playbook of intimidation/silencing tactics being used against her,” Coulter tweeted.

Many women including myself are interested in the Stormy Daniels story primarily b/c of the playbook of intimidation/silencing tactics being used against her — many of them very similar to those that other powerful public figures such as Weinstein have used. Information is power. https://t.co/BWjpw0Lm3K

I don’t care who he sleeps with. I do care that he paid someone and/or hired brutes to keep it quiet so he could convince republicans he was their new non-hypocritical poster boy.

Jesus effing christ please don’t impose your male worldview on the rest of us.

There are many real-life examples to support this, starting with the most egregious. Allegations suggest Harvey Weinstein regularly threatened actors, journalists, and their sources in an attempt to prevent victims from going public with their allegations. Uma Thurman even attributes a car crash on the set of Kill Bill: Vol. 2 to a souring relationship with director Quentin Tarantino after Weinstein allegedly sexually assaulted her. The crash was followed by an agreement that attempted to absolve Miramax “of any consequences of [Thurman’s] future pain and suffering.”

But you don’t need to be as mega-famous as Weinstein or Trump to use force, power, and coercion to silence survivors. For instance, Polygon’s Nick Robinson reportedly sent unwanted sexual advances to women throughout the games industry, which went unnoticed in the public eye because his alleged victims feared being a public target. And in the Brooklyn-based alt-lit scene, writer Stephen Tully Dierks allegedly used his own life as a threat, claiming that he would commit suicide if he faced charges for sexual assault. Fear is why only 15-35 percent of assaults are reported to police. Perpetrators convince survivors that their stories won’t be believed or that they will face toxic audiences that will ruin their careers and safety. This extends outside of assault and harassment, too, to consensual affairs like Daniels’ and everyday interactions in the workplace, not to mention cultural norms and laws. Shame and silence are the oldest tactics in the book that men use to control women (think dress codes and anti-abortion legislation), especially when it comes to matters of sex.

On 60 Minutes, Daniels said she knew her child was used against her to keep her in line. She knew the world would criticize her for being a sex worker. She knew all this when she initially denied the affair. Her story may not be for #MeToo, at least in her eyes, but it’s one that survivors around the world can relate to because it speaks to the power men gain when they try to silence women.

By appearing on 60 Minutes, Daniels showed that women can be heard and believed. Survivors can fight back. Speaking out, her story suggests, will set them free. That might not be the indictment of Trump many of us were hoping for, but it’s a powerful message all the same.